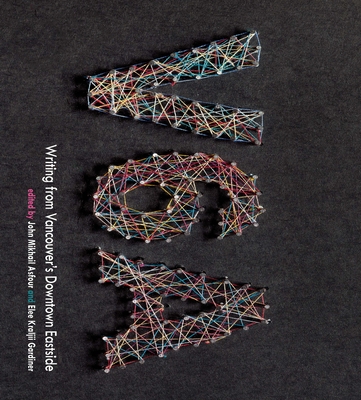 
Currently Unavailable
V6A is the postal prefix for Vancouver's Downtown Eastside, Canada's poorest neighborhood and a prime example of the ramifications of urban blight in North America; it is also the epicenter of a notorious missing women's case in which many sex workers and others were murdered, and home to a controversial safe-injection site for drug users. This anthology refracts the experience of those who live and work in the Downtown Eastside, reappropriating the coding of the area and recasting the neighborhood as a site of creative energy, community spirit, and human dignity.
Cathleen With (Having Faith in the Polar Girls' Prison) writes about the area's street kids. Michael Turner (Hard Core Logo) recalls years living in an apartment on Powell Street. Madeleine Thien (Certainty) examines the effect of the neighbourhood on her family's dynamic and its role in her development as a writer. Wayde Compton (After Canaan) writes about Hogan's Alley and the history of Vancouver's black community. Other pieces explore the sex trade and the Missing Women of the DTES, the culture of Chinatown and other ethnic communities, and the simple, human truths around poverty, kinship, forgiveness, and faith, and remind us that expression flourishes regardless of barriers. Includes a preface by writer Gary Geddes. Partial proceeds from the sale of this book will fund Thursdays Writing Collective, a program for DTES writers directed by co-editor Elee Kraljii Gardiner.
John Mikhail Asfour: John Mikhail Asfour is the author of four poetry collections, the most recent of which is Blindfold (McGill-Queen's University Press).Elee Kraljii Gardiner: Elee Kraljii Gardiner directs Thursdays Writing Collective in Vancouver's Downtown Eastside.

This work is real, heart wrenching, sublime and necessary. These are slices of lives and memories that come from a space that resonates with sounds of loss, vision and resistance. It is a collection that speaks from the margin to the centre. It is here and it shall remain a timely documentation of a mythical place, a threatened refuge in a blanket of creativity and strength. A significant contribution to this land's narrative and account. Rawi Hage, author of DeNiro's Game

V6A is an intimate glimpse into the lives of important writers: not those who dream of literary fame, but rather those whose need for personal expression is integral to their sense of self. This is a book that is rooted in one of the great democratic purposes of literature: to expand our understanding of the human experience. Brad Cran, co-author of Hope in Shadows: Stories and Photographs of Vancouver's Downtown Eastside and Poet Laureate of Vancouver (2009-11)

The book’s strength comes from the indelible image the stories and poems leave when experienced as a whole; together, they present a neighbourhood that, despite its problems, is very much alive. Georgia Straight