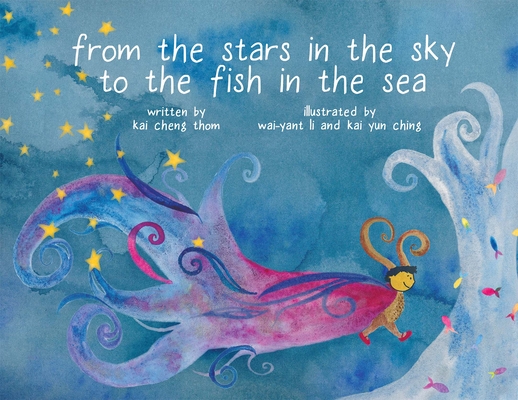 In the magical time between night and day, when both the sun and the moon are in the sky, a child is born in a little blue house on a hill. And Miu Lan is not just any child, but one who can change into any shape they can imagine. The only problem is they can't decide what to be: A boy or a girl? A bird or a fish? A flower or a shooting star? At school, though, they must endure inquisitive looks and difficult questions from the other children, and they have trouble finding friends who will accept them for who they are. But they find comfort in the loving arms of their mother, who always offers them the same loving refrain: "whatever you dream of / i believe you can be / from the stars in the sky to the fish in the sea."

In this captivating, beautifully imagined picture book about gender, identity, and the acceptance of the differences between us, Miu Lan faces many questions about who they are and who they may be. But one thing's for sure: no matter what this child becomes, their mother will love them just the same.

Kai Cheng Thom is a writer, performance artist, and psychotherapist in Toronto. Her first poetry book, a Place Called No Homeland, was published in 2017.

Kai Yun Ching is a community-based organizer, educator, and illustrator in Montreal.

Wai-Yant Li is a ceramics artist and illustrator in Montreal.

Kai Cheng Thom: Kai Cheng Thom is a writer, performance artist, and psychotherapist based in Montreal and Toronto. Her first novel, Fierce Femmes and Notorious Liars, was released by Metonymy Press in 2016, and her first poetry book, a place called No Homeland, was published by Arsenal Pulp Press in 2017.Kai Yun Ching: Kai Yun Ching is a community-based organiser, educator and illustrator based in Montreal. They edited and published Children's Stories, a collection of tales written by children, with the publishing collective Quilted Creatures in 2016.Wai-Yant Li: Wai-Yant Li is an artist who specializes in ceramics and illustration. For the last 13 years, they have been presenting and selling their work and various major craft fairs, galleries, and museums.