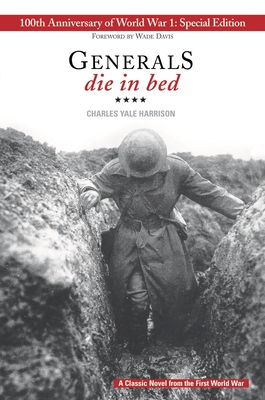 
Currently Unavailable
As the world marks the 100th anniversary of the start of World War I, the bestselling novel Generals Die in Bed becomes more relevant than ever. Originally published in 1930, the landmark novel was one of the first to shatter the world's illusion that war is a glorious endeavor. Instead, this chilling first-hand account brought readers face to face with the brutal, ugly realities of life in the trenches. Often compared to All Quiet on the Western Front and A Farewell to Arms, Generals Die in Bed was described by The New York Times as "a burning, breathing, historic document." With veterans of WWI no longer here to tell their tales, this book stands as a lasting monument to the horror of war.
Charles Yale Harrison was a machine-gunner in the First World War. After being wounded, he was a writer in Montreal and later New York, where he died in 1954. Wade Davis is a National Geographic Explorer-in-Residence, and the author of 15 books including Into the "Silence: The Great War," "Mallory, and the Conquest of Everest."