The Guy, the Girl, the Artist and His Ex (Paperback) 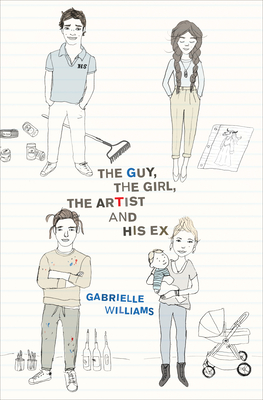 The Guy, the Girl, the Artist and His Ex (Paperback)


Ships to Our Store in 1-5 Days
The Guy decides to have a house party while his parents are out of town. The Girl is adjusting to life in a new country. The Artist has discovered that forgery is a lucrative business. And his Ex, mother of his baby, is just trying to make ends meet. As Guy, a feckless high-school senior, plans the party of the year, Rafi worries about her mother, who is still grieving over the drowning death of Rafi's little brother back in Bolivia and haunted by the specter of La Llorona, the weeping ghost who steals children. Meanwhile, Rafi's uncle is an art dealer involved in a scheme to steal one of the most famous paintings in the world, but he needs the forgery skills of Luke, a talented artist who has just split up with his girlfriend, Penny, who wants nothing more than to get him back to be a proper father to Joshie, the baby Rafi babysits. Engaging, provocative, darkly humorous and fast-paced, with a shocking and near-tragic ending, when Rafi's mother's grief tips over into mental illness.
Gabrielle Williams has worked in advertising, recording studios and television. Her first YA novel, Beatle Meets Destiny, was shortlisted for the Prime Minister s Award and the Victorian Premier s Literary Award and was named a YALSA Best Fiction for Young Adults and a Booklist Top Ten Romance Fiction for Youth."