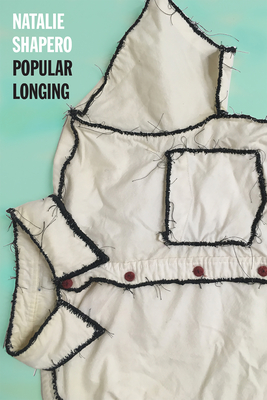 
Available at One of Our Locations
The poems of Natalie Shapero's third collection, Popular Longing, highlight the ever-increasing absurdity of our contemporary life. With her sharp, sardonic wit, Shapero deftly captures human meekness in all its forms: our senseless wars, our inflated egos, our constant deference to presumed higher powers--be they romantic partners, employers, institutions, or gods. "Why even / look up, when all we'll see is people / looking down?" In a world where everyone has to answer to someone, it seems no one is equipped to disrupt the status quo, and how the most urgent topics of conversation can only be approached through refraction. By scrutinizing the mundane and all that is taken for granted, these poems arrive at much wider vistas, commenting on human sadness, memory, and mortality. Punchy, fearlessly ironic, and wickedly funny, Popular Longing articulates what it means to share a planet, for better or more often for worse, with other people.
Natalie Shapero is the current Professor of the Practice of Poetry at Tufts University in Massachusetts. Her most recent poetry collection, Hard Child (Copper Canyon Press, 2017), was shortlisted for the International Griffin Poetry Prize. Her previous collection, No Object (Saturnalia, 2013), received the Great Lakes College Association New Writers Award. Known for her dark, laconic, and occasionally self-deprecating humor, Shapero's poetry has been said to resemble stand-up comedy, weaving her poems into subtle set-ups and punchlines that build from and interact with one another. Her work, which has appeared in The New Yorker, The New York Times Magazine, Poetry, and elsewhere, has also been included in installations by the artist Ann Hamilton at the Park Avenue Armory, the Fabric Workshop and Museum, and the Dell Medical School at UT Austin. She lives outside Boston, Massachusetts.