$Pread: The Best of the Magazine That Illuminated the Sex Industry and Started a Media Revolution (Paperback) 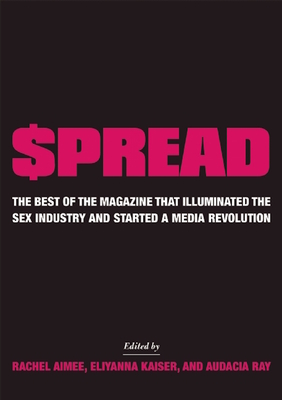 "A fascinating collection from a group of courageous women who created the first publication to explore sex work in a compelling and intelligent way." --Candida Royalle

$pread, an Utne Award-winning magazine by and for sex workers, was independently published from 2005 to 2011. This collection features enduring essays about sex work around the world, first-person stories that range from deeply traumatic to totally hilarious, analysis of media and culture, and fantastic illustrations and photos produced just for the magazine. The book also features the previously untold story of $pread and how it has built a wider audience in its posthumous years. What started as a community tool and trade magazine for the sex industry quickly emerged as the essential guide for people curious about sex work, for independent magazine enthusiasts, and for labor and civil rights activists.

Rachel Aimee cofounded $pread magazine in 2004 and was an editor-in-chief for four and a half years. Now a parent and freelance copy editor, she also organizes for strippers' rights with We Are Dancers. She lives in Brooklyn. Eliyanna Kaiser is a former executive editor of $pread magazine. She is currently raising her two children in Manhattan. In her spare time, she writes fiction. Audacia Ray is the founder and executive director of the Red Umbrella Project (RedUP), a peer-led organization in New York that amplifies the voices of people in the sex trades through media, storytelling, and advocacy programs. At RedUP, she publishes the literary journal Prose & Lore: Memoir Stories About Sex Work. She is the author of Naked on the Internet: Hookups, Downloads, and Cashing in On Internet Sexploration and has contributed to many anthologies. She joined the $pread staff in 2004 and was an executive editor from 2005 to 2008.