Revolution for the Hell of It: The Book That Earned Abbie Hoffman a Five-Year Prison Term at the Chicago Conspiracy Trial (Paperback) 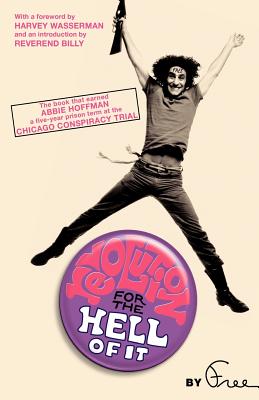 While the supremely popular Steal This Book is a guide to living outside the establishment, Revolution for the Hell of It is a chronicle of Abbie Hoffman's radical escapades that doubles as a guidebook for today's social and political activist.

Hoffman pioneered the use of humor, theater, and surprise to change the world for the better. In Revolution for the Hell of It he gives firsthand accounts of his legendary adventures, from the activism that led to the founding of the Youth International Party ("Yippies!) to the 1968 Democratic National Convention protests ("a perfect mess") that resulted in his conviction as part of the Chicago Seven.

Also chronicled is the the mass antiwar demonstration he helped lead in which over 50,000 people attempted to levitate the Pentagon using psychic energy and the time he threw fistfuls of dollar bills onto the floor of the New York Stock Exchange and watched the traders scramble. With antiwar sentiment once again on the rise and an incendiary political climate not seen since the book's original printing, Abbie Hoffman's voice is more essential than ever.

Abbie Hoffman (1936-1989) was an American political and social activist, anarchist, and revolutionary who co-founded the Youth International Party ("Yippies"). He was arrested and tried for his role in protests that led to violent confrontations with police during the 1968 Democratic National Convention. Hoffman continued his activism into the 1970s, and remains an icon of the anti-war movement and the counterculture era.