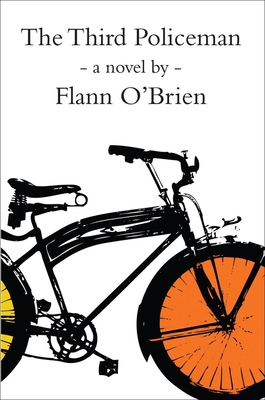 By Flann O'Brien, Denis Donoghue (Introduction by)
$14.95
Email or call for price

A supremely funny, dark, dreadful, deeply Irish novel unlike anything you’ve ever read. There are spoilers in the introduction, fair warning. As good as Beckett or Joyce if not better, this is my favorite novel of all-time. Go on and properly disarrange your senses.

The Third Policeman is Flann O'Brien's brilliantly dark comic novel about the nature of time, death, and existence. Told by a narrator who has committed a botched robbery and brutal murder, the novel follows him and his adventures in a two-dimensional police station where, through the theories of the scientist/philosopher de Selby, he is introduced to "Atomic Theory" and its relation to bicycles, the existence of eternity (which turns out to be just down the road), and de Selby's view that the earth is not round but "sausage-shaped." With the help of his newly found soul named "Joe, " he grapples with the riddles and contradictions that three eccentric policeman present to him.

The last of O'Brien's novels to be published, The Third Policeman joins O'Brien's other fiction (At Swim-Two-Birds, The Poor Mouth, The Hard Life, The Best of Myles, and The Dalkey Archive) to ensure his place, along with James Joyce and Samuel Beckett, as one of Ireland's great comic geniuses.