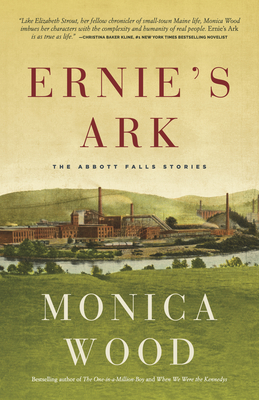 "Like Elizabeth Strout, her fellow chronicler of small-town Maine life, Monica Wood imbues her characters with the complexity and humanity of real people. Ernie's Ark is as true as life."--Christina Baker Kline, author of Orphan Train

In nine interlinking stories, the town of Abbot Falls reacts as Ernie Whitten, pipefitter, builds a giant ark in his backyard. Ernie was weeks away from a pension-secured retirement when the union went on strike. Now his wife Marie is ill. Struck with sudden inspiration, Ernie builds the ark as a work of art for his wife to see from the window; a vessel to carry them both away; or a plea for God to spare Marie, come hell or high water. As the ark takes shape, the rest of the town carries on. There's Dan Little, a building-code enforcer who comes to fine Ernie for the ark and makes a significant discovery about himself; Francine Love, a precocious thirteen-year-old who longs to be a part of the family-like world of the union workers; and Atlantic Pulp & Paper CEO Henry John McCoy, an impatient man wearily determined to be a good father to his twenty-six-year-old daughter. The people of Abbott Falls will try their best to hold a community together, against the fiercest of odds. . . . Few writers can capture the extraordinary within seemingly ordinary lives as does Monica Wood. An unforgettable tapestry of love, loneliness--and neighbors.