The Haiku Handbook#25th Anniversary Edition: How to Write, Teach, and Appreciate Haiku (Paperback) 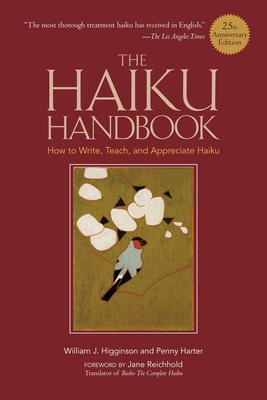 The Haiku Handbook#25th Anniversary Edition: How to Write, Teach, and Appreciate Haiku (Paperback)


Currently Unavailable
The Haiku Handbook is the first book to give readers everything they need to begin appreciating, writing, or teaching haiku. In this groundbreaking and now-classic volume, the authors present haiku poets writing in English, Spanish, French, German, and five other languages on an equal footing with Japanese poets. Not only are the four great Japanese masters of the haiku represented (Basho, Buson, Issa, and Shiki) but also major Western authors not commonly known to have written poetry in this form, including Gary Snyder, Jack Kerouac and Richard Wright.

With a new foreword by poet, translator, and author Jane Reichhold (Basho: The Complete Haiku), this anniversary edition presents a concise history of the Japanese haiku, including the dynamic changes throughout the twentieth century as this beloved poetry form has been adapted to modern and urban settings. Full chapters are offered on form, the seasons in haiku, and haiku craft, plus background on the Japanese poetic tradition and the effect of translation on our understanding of haiku. Other unique features are chapters on teaching and sharing haiku, with lesson plans for both elementary and secondary school use; a seasonal word index of poetic words; a comprehensive glossary; and a list of enduring classic resources for further exploration. By any standard, The Haiku Handbook is the defining volume in the genre.
WILLIAM J. HIGGINSON (1938–2008) has been called "the guru of American haiku." For over 40 years, Higginson translated, wrote, commented about, lectured on and taught haiku. He was the author or editor of more than 30 books.

PENNY HARTER is a widely-published poet. She is a poet-in-residence for the New Jersey State Council of the Arts and has won three poetry fellowships from the Council, as well as an award from the Poetry Society of America. Harter has worked for many years as a teaching poet for the Council's Arts-in-Education program; she also travels extensively, giving workshops and lectures.
"The most comprehensive compendium of the haiku—its nature, uses, and history—ever to appear in English or any other language except Japanese."—The New York Times Book Review