Mirrors: Stories of Almost Everyone (Paperback) 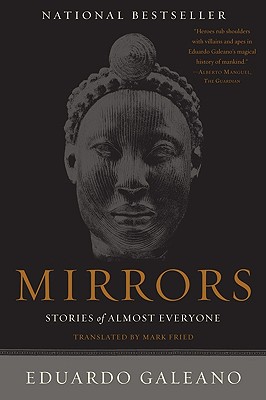 Mirrors: Stories of Almost Everyone (Paperback)


Ships to Our Store in 1-5 Days
Throughout his career, Eduardo Galeano has turned our understanding of history and reality on its head. Isabelle Allende said his works "invade the reader's mind, to persuade him or her to surrender to the charm of his writing and power of his idealism."

Mirrors, Galeano's most ambitious project since Memory of Fire, is an unofficial history of the world seen through history's unseen, unheard, and forgotten. As Galeano notes: "Official history has it that Vasco NÃºde Balboa was the first man to see, from a summit in Panama, the two oceans at once. Were the people who lived there blind??"

Recalling the lives of artists, writers, gods, and visionaries, from the Garden of Eden to twenty-first-century New York, of the black slaves who built the White House and the women erased by men's fears, and told in hundreds of kaleidoscopic vignettes, Mirrors is a magic mosaic of our humanity.
Eduardo Galeano (1940-2015) was one of Latin America's most distinguished writers. A Uruguayan journalist, writer, and novelist, he was considered, among other things, "a literary giant of the Latin American left" and "global soccer's preeminent man of letters." He is the author of the three-volume Memory of Fire, Open Veins of Latin America, Soccer in Sun and Shadow, The Book of Embraces, Walking Words, Upside Down, and Voices in Time. Born in Montevideo in 1940, he lived in exile in Argentina and Spain for years before returning to Uruguay.

His work has been translated into twenty-eight languages. He is the recipient of many international prizes, including the first Lannan Prize for Cultural Freedom, the Casa de las Americas Prize, and the First Distinguished Citizen of the region by the countries of Mercosur. Galeano once described himself as "a writer obsessed with remembering, with remembering the past of America and above all that of Latin America, intimate land condemned to amnesia." Isabel Allende, who said her copy of Galeano's book was one of the few items with which she fled Chile in 1973 after the military coup of Augusto Pinochet, called Open Veins of Latin America "a mixture of meticulous detail, political conviction, poetic flair, and good storytelling."