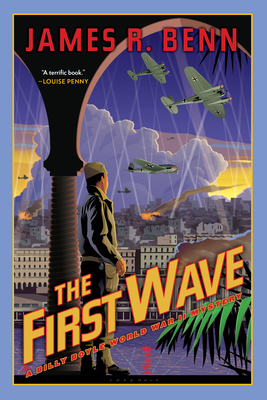 This is book number 2 in the A Billy Boyle WWII Mystery series.

Billy Boyle is dispatched to help arrange the surrender of Vichy French forces in Algeria. But dissension among the regular army, the militia, and De Gaulle’s Free French forces allows black marketers in league with the Germans to divert medical supplies, leading to multiple murders. Billy must find the killers and rescue the woman he loves, a British spy.
James R. Benn is the author of the Billy Boyle World War II mysteries. The debut, Billy Boyle, was named one of five top mysteries of 2006 by Book Sense and was a Dilys Award nominee. A Blind Goddess was longlisted for the IMPAC Dublin Literary Award, and The Rest Is Silence was a Barry Award nominee. A librarian for many years, Benn lives in Connecticut with his wife, Deborah Mandel.
Praise for The First Wave

"Another rousing adventure . . . Once again the period details are spot-on and Billy, who doesn't pretend to be anything but what he is, continues to make a thoroughly engaging detective."
—The Denver Post

“Benn follows up his first World War II mystery (Billy Boyle) with another danger-filled episode and delivers a cross-genre tale that is at once spy story, soldier story, and hard-Boyled detective.”
—Library Journal, Starred Review