A Hotel Lobby at the Edge of the World: Poems (Paperback) 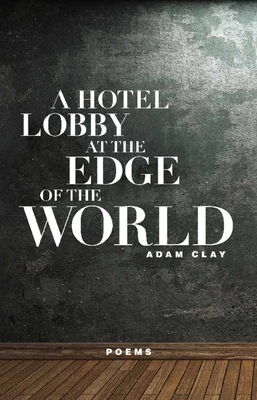 A Hotel Lobby at the Edge of the World: Poems (Paperback)

The haunting and crystalline poems in Adam Clay's A Hotel Lobby at the Edge of the World examine the moment when solitude slips into separation, when a person realizes he can barely see the place he set out from, and must make his way back to the present.

Imagining the return to daily life as a negotiation between an inner world and the natural one, this collection tracks the subtly shifting tenors of thought that occur as the landscape around the speaker changes. In this journey, reverie can be a siren's song, and Thoreau's "border life" between civilization and wildness is realized in all its possibilities and difficulties. The resulting poems live somewhere between those of James Wright and John Ashbery: they seek wholeness even as they acknowledge that "a fragment is as complete as thought can be."

Thoughtful and subtly complex, A Hotel Lobby at the Edge of the World is a collection filled with a generous gentleness--an attention to the world so careful it's as if the mind is "washing each grain of sand."

Adam Clay is the author of The Wash (Parlor Press, 2006) and three chapbooks. His work has been published in A Public Space, Gulf Coast, and The Iowa Review. He co-edits Typo Magazine, curates the Poets in Print Reading Series at the Kalamazoo Book Arts Center, and teaches at Western Michigan University. He lives in Kalamazoo, Michigan.

"Clay writes in the language of dreams....Adam Clay is a fresh voice full of promise and A Hotel Lobby At The Edge Of The World is definitely worth a read."
Gabino Iglesias, Black Heart Magazine

"At the edge of the world, you'll want to have this book. The final lines of Adam Clay’s poem, 'Scientific Method,' have been haunting me for weeks . . . Few people could write a better poetic line than Adam Clay does."
Jeff Charis-Carlson, Iowa Press-Citizen