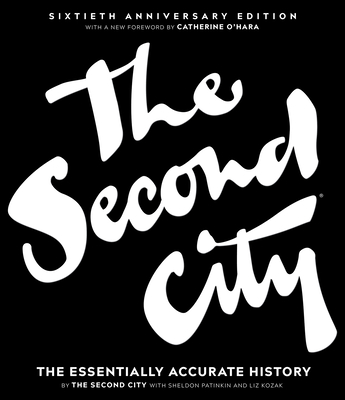 
Ships to Our Store in 1-5 Days
"Chicago's temple of improvisational comedy." --New York Times Since opening in 1959, The Second City has transformed the state of comedy as we know it, creating a wickedly funny culture of improvisation and training thousands of artists--who now dominate popular entertainment--in the art of improv-based theater. This newly revised and expanded edition of The Second City tells the story of the legendary comedy institution and the Emmy-winning sketch comedy classic SCTV, folding new material and commentary in with tales of The Second City's storied past. The giants who got their start at The Second City in its earlier years--including Alan Arkin, Dan Aykroyd, John Belushi, John Candy, Chris Farley, Eugene Levy, Tim Meadows, Bill Murray, Mike Myers, Catherine O'Hara, Gilda Radner, Joan Rivers, Martin Short, and Fred Willard--are joined in these pages by more recent alumni like Aidy Bryant, Steve Carell, Stephen Colbert, Tina Fey, Keegan-Michael Key, Jack McBrayer, Bob Odenkirk, and Jason Sudeikis. The real stories of The Second City and its performers will make you see the comedy juggernaut in a whole new light. Did you know John Belushi got his start lifting jokes from The Second City? Or that many cast members--including Stephen Colbert and Nia Vardalos--sold tickets or waited tables at the theater before they made it to the stage? The Second City takes you behind the scenes of the world's leading improv theater. Now spanning six decades, the story of The Second City is both funnier and more poignant than anyone could have imagined.
The Second City began as a pioneering improvisational theater in Chicago in 1959. It has grown into one of the world's largest and most influential entertainment institutions, with theaters and Training Centers in Chicago, Toronto, and Hollywood. Sheldon Patinkin was one of The Second City's first directors and served as the company's artistic consultant for fifty-five years. A mentor to thousands of performers, directors, and creative spirits, he passed away in 2014. Liz Kozak has been with The Second City since 2013 as a writer, an editor, and a producer on a variety of special events and film projects, including the upcoming Netflix SCTV reunion special directed by Martin Scorsese. Prior to her time at The Second City, Ms. Kozak spent over a decade working for Oprah Winfrey's Harpo Studios in Chicago. Comedic trailblazer Catherine O'Hara first found success onstage at The Second City Toronto and as an actress and Emmy Award-winning writer on the iconic sketch comedy series SCTV. Her prodigious career in film and television has gifted pop culture with iconic performances in Home Alone, Beetlejuice, Best in Show, and Schitt's Creek. A native of Toronto, O'Hara received the prestigious Order of Canada in 2018 in recognition of her lifetime of outstanding achievement.