Between Capitalism and Community (Paperback) 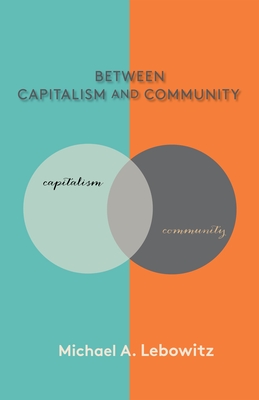 Connects the Marxist construct of capitalism to systems of community

In this book, Michael Lebowitz deepens the arguments he made in his award-winning, Beyond Capital. Karl Marx, in Capital, focused on capital and the capitalist class that is its embodiment. It is the endless accumulation of capital, its causes and consequences that are central to Marx's analysis. In taking this approach, Marx tended to obscure not only the centrality of capital's "immanent drive" and "constant tendency" to divide the working class but also the political economy of the working class ("social production controlled by social foresight"). In Between Capitalism and Community, Lebowitz demonstrates that capitalism contains within itself elements of a different society, one of community. Whereas Marx's intellectual construct of capitalism treats it as an organic system that reproduces its premises of capital and wage-labor (including a working class that looks upon the requirements of capital "as self-evident natural laws"), Lebowitz argues that the struggle of workers in common and activities based upon solidarity point in the direction of the organic system of community, an alternative system that produces its own premises, communality, and recognition of the needs of others. If we are to escape the ultimate barbarism portended by the existing crisis of the earth system, the subordination of the system of capitalism by that of community is essential. Since the interregnum in which capitalism and community coexist is marked by the interpenetration and mutual deformation of both sides within this whole, however, the path to community cannot emerge spontaneously but requires a revolutionary party that stresses the development of the capacities of people through their protagonism.

Michael Lebowitz is professor emeritus of economics at Simon Fraser University in Vancouver, Canada, and the author of several books including The Socialist Imperative, The Contradictions of "RealSocialism," and The Socialist Alternative. He was Director, Program in Transformative Practice andHuman Development, Centro Internacional Miranda, in Caracas, Venezuela, from 2006-11.