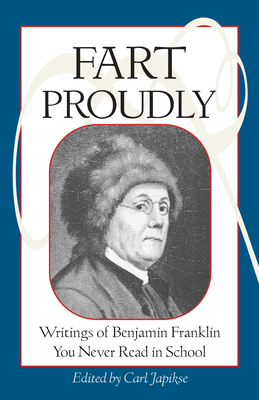 
Ships to Our Store in 1-5 Days
Meet Benjamin Franklin as you’ve never met him before—this hilarious collection includes the Founding Father’s satirical writings on farting, adultery, and other irreverent subjects you won’t find in your history books.

A mention of flatulence might conjure up images of bratty high school boys or lowbrow comics. But one of the most eloquent—and least expected—commentators on the subject is Benjamin Franklin. The writings in Fart Proudly reveal the rogue who lived peaceably within the philosopher and statesman. Included are “The Letter to a Royal Academy”; “On Choosing a Mistress”; “Rules on Making Oneself Disagreeable”; and other jibes.

Franklin’s irrepressible wit found an outlet in perpetrating hoaxes, attacking marriage and other sacred cows, and skewering the English Parliament. Reminding us of the humorous, irreverent side of this American icon, these essays endure as both hilarious satire and a timely reminder of the importance of a free press.
Benjamin Franklin (1706–1790) was an inventor, scientist, author, and a founding father of the United States. Franklin is best known for his role in developing the Declaration of Independence and for serving as the first ambassador to France from 1776-1785. His published works include Poor Richard’s Almanack, The Art of Virtue, and The Way to Wealth.

Carl Japikse is the author and contributor to over seventy works focusing on the mind, body, humor, and creativity. His published works include Fart Proudly: Writings of Benjamin Franklin You Never Read in School, The Light Within Us: A Step-by-Step Guide to Spiritual Growth, and Exploring the Tarot. He resides in Georgia with his family.