A Taste of the Past: The Daily Life and Cooking of a Nineteenth-Century Hungarian-Jewish Homemaker (Paperback) 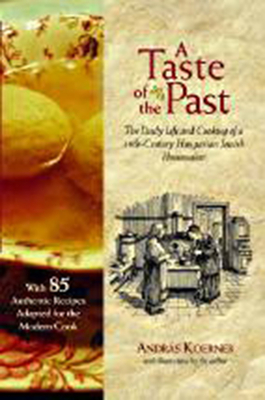 By András Koerner
Email or call for price

A Taste of the Past is an entertaining reconstruction of the daily life and household of Therese (Riza) Baruch (1851–1938), the great-grandmother of the author, András Koerner. Based on an unusually complete cache of letters, recipes, personal artifacts, and eyewitness testimony, Koerner describes in loving detail the domestic life of a nineteenth-century Hungarian Jewish woman, with special emphasis on the meals she served her family. Based on Riza’s letters, part one offers an imaginative sketch of growing up in a religious middle-class family in the 1860s and 70s in an industrial town in western Hungary. Part one also describes Riza’s reactions to the dilemmas posed by the early signs of Jewish assimilation. In part two, the heart of the book, Riza has married, moved to a smaller town near the Austrian border, and become the central figure of a large household. Koerner recreates a typical day in the life of Riza and her family, peppering his narrative with recipes of the food she served for breakfast, mid-morning snack, lunch, afternoon coffee-and-cake, and the much more modest evening meal. Riza’s family was religious, and Koerner also describes the special foods (pike in sour aspic, cholent, apple-matzo kugel, and much more) she served to celebrate the Sabbath and the six major Jewish holidays. Short introductions to the recipes describe the evolution of the dishes through the centuries, their role in Jewish culture, and how cultural influences and religious traditions shaped Riza's cooking. More than 125 evocative pen-and-ink illustrations bring Riza’s story and her food to life. A Taste of the Past offers an enchanting look at Jewish daily life in western Hungary in the late nineteenth and early twentieth century, a time when middle-class Jews were increasingly assimilated into mainstream Hungarian life and culture. Such small-town Jewish life had completely disappeared due to the Holocaust. Koerner’s book revives this lost world and invites the reader to be a guest in Riza’s house to watch her caring for her family, shopping, cooking, and preparing for the holidays. By offering easy-to-follow updated versions of her recipes, the book also allows readers to savor Riza's dishes and desserts in their own kitchens, thus completing this experience of a visit to the past.

ANDRÁS KOERNER was born in Budapest, Hungary where he initially studied art. He then received his degree in architecture, worked as an architect, and won numerous awards in Hungarian architectural competition. In 1968 András moved to the United States, where he has continued to work as an architect. Several national magazines featured his design for the remodeling of a Victorian townhouse in New York City. András is a passionate amateur cook and likes nothing more than preparing his great-grandmother’s recipes for his daughters and their families.