"I Heard You Paint Houses": Frank "The Irishman" Sheeran & Closing the Case on Jimmy Hoffa (Paperback) 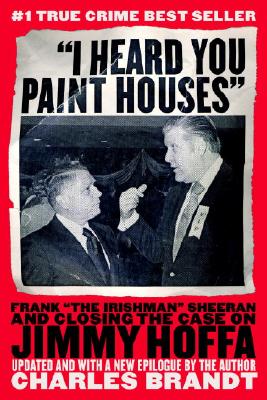 By Charles Brandt
Email or call for price.
Hard to Find

"I Heard You Paint Houses" will soon be a major motion picture directed by Martin Scorsese. The working title for the movie is "The Irishman."
The first words Jimmy Hoffa ever spoke to Frank "the Irishman" Sheeran were, "I heard you paint houses." To paint a house is to kill a man. The paint is the blood that splatters on the walls and floors. In the course of nearly five years of recorded interviews Frank Sheeran confessed to Charles Brandt that he handled more than twenty-five hits for the mob, and for his friend Hoffa.
Sheeran learned to kill in the U.S. Army, where he saw an astonishing 411 days of active combat duty in Italy during World War II. After returning home he became a hustler and hit man, working for legendary crime boss Russell Bufalino. Eventually he would rise to a position of such prominence that in a RICO suit then-U.S. Attorney Rudy Giuliani would name him as one of only two non-Italians on a list of 26 top mob figures.
When Bufalino ordered Sheeran to kill Hoffa, he did the deed, knowing that if he had refused he would have been killed himself.
Sheeran's important and fascinating story includes new information on other famous murders including those of Joey Gallo and JFK, and provides rare insight to a chapter in American history. Charles Brandt has written a page-turner that has become a true crime classic.

Born and raised in New York City, Charles Brandt is a former junior high English teacher, welfare investigator in East Harlem, homicide prosecutor and Chief Deputy Attorney General of the State of Delaware. In private practice since 1976, Brandt was elected president of the Delaware Trial Lawyers Association and Delaware Chapter of the American Board of Trial Advocates. He has been named by his peers as one of the "Best Lawyers in America" and one of the "Best Lawyers in Delaware." He is a frequent speaker on cross-examination and interrogation techniques for reluctant witnesses. Brandt is the author of a novel based on major crimes he solved through interrogation, The Right to Remain Silent (SMP 1988). He lives in Lewes, Delaware and Sun Valley, Idaho with his wife, Nancy, and has three grown children.

"Pre-production of the movie 'The Irishman' is moving ahead. That's the name currently given to the film based on Charles Brandt's book, 'I Heard You Paint Houses.' It's a compelling, can't-put-down account of the life of Philadelphia-area mobster Frank Sheeran." —Delaware News Journal

“Is Sheeran believable? Very . . . and ‘I Heard You Paint Houses’ is a very enjoyable book.” —Trial Magazine

“A page-turning account of one man’s descent into the mob.” —Delaware News Journal

“Sheeran’s confession that he killed Hoffa in the manner described in the book is supported by the forensic evidence, is entirely credible, and solves the Hoffa mystery.” – Michael Baden, M.D., former Chief Medical Examiner of the City of New York

“I’m fully convinced – now – that Sheeran was in fact the man who did the deed. And I’m impressed, too, by the book’s readability and by its factual accuracy in all areas on which I’m qualified to pass judgment. Charles Brandt has solved the Hoffa mystery.” —Professor Arthur Sloane, author of Hoffa

“One of Sheeran’s virtues was his gift as a storyteller; one of his flaws was his tendency to murder, in mobster jargon, ‘to paint houses.’ . . . Sheeran acknowledged that he was the one who killed the Teamsters boss. . . . On July 30, 1975, Hoffa disappeared. Sheeran explains how he did it, in prose reminiscent of the best gangster films.” –Associated Press

“Told with such economy and chilling force as to make The Sopranos suddenly seem overwrought and theatrical.” —New York Daily News