The Future of Power (Hardcover) 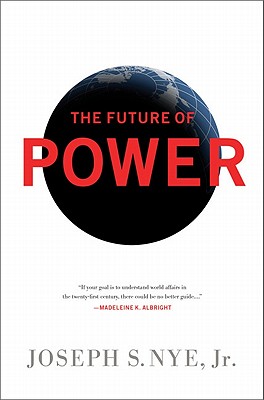 The Future of Power (Hardcover)

The influential policy thinker who coined the term “soft power” examines the changing nature of power since the Cold War, the new ways in which it is exercised, and how those changes impact America’s role in the world

Joseph S. Nye, Jr. is University Distinguished Service Professor and former Dean of Harvard's Kennedy School of Government. He has served as Assistant Secretary of Defense for International Security Affairs, Chair of the National Intelligence Council, and a Deputy Under Secretary of State. The author of many books, he is a fellow of the American Academy of Arts and Sciences, the British Academy, and the American Academy of Diplomacy.

“Joseph Nye is America’s foremost expert on the substance, diversity, uses, and abuses of power. He writes with insights that a president or secretary of state would find valuable, and makes foreign policy less foreign for every reader. If your goal is to understand world affairs in the twenty-first century, there could be no better guide than The Future of Power.”

Walter Isaacson, president and CEO of The Aspen Institute

“Power once came from controlling the sea lanes. In the future, Joe Nye explains, it will come from the ability to navigate the information lanes of cyberspace and control the narrative that influences people. Sweeping in its themes but specific in its examples, this book is exciting to read and fascinating to contemplate.”

Economist, February 4, 2011
"If…you find yourself hankering after sturdier fare, then salvation is at hand in the form of Joseph Nye's painstaking new work, The Future of Power.…The book comes alive when Mr. Nye…cast[s] doubt on the idea that America is in precipitate decline."

Kirkus, January 15, 2011
"Illuminating analysis of the mechanisms of power shaping global politics…. Nye Jr.’s latest book steers the traditional debate over power politics into a new direction….The author’s sober, rigorous analysis anchors a debate that seems to be squirming from the grip of most media. A great reminder that fear and hate are not the only tools used to sell books these days—a substantial work that should be read by anyone with an interest in how politics works."

Finacial Times, March 6, 2011
“An illuminating distillation of the power relationships shaping a world in which the state with the best military can lose to the adversary with the better story…Nye makes sense of these new complexities.”
Washington Times, April 5, 2011 “Nye’s writing style is accessible even when his subject grows more complex…. A helpful primer to better understand the tools available to those formulating America’s foreign policy.”

Foreign Affairs, March/April 2011
“Nye is the preeminent theorist of power in world affairs today, and this book is a grand synthesis of his ideas and an essential guide to the debate over the decline of the United States and the rise of China.”
LA Times, March 25, 2011“Whether it's navigating the political waves of the Middle East or the diplomatic dance with China, the book offers a generous batch of insights…. Nye is a savvy and respected analyst, and he doesn't disappoint here. He's grappling with the hardest of questions, and though The Future of Power can at times read somewhat meanderingly, it's the best kind of meandering: a learned journey through big ideas of what power means and how it is ever-evolving.”
Washington Post, April 1, 2011“Insightful, readable… Rich in clever one-liners and felicitous phrases…. Nye is a master of his field at the height of his powers.”New Statesman
“As power moves from west to east and from the palaces of dictators to the street, it is not just the identities of power brokers that are changing: so is the very meaning of power. No one is better placed to explain these trends than the scholar-statesman Joe Nye… The Future of Power contains important essays on both ‘cyber power’ and ‘American decline’, but what is most useful is Nye’s subtle exegesis of the mechanics of more conventional forms of power.”

Guardian (UK), May 29, 2011 “Nye has a lot of interesting points to make against conventional wisdom in matters geopolitical and cultural.”