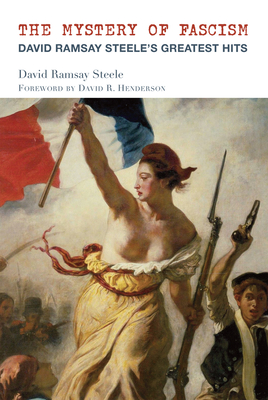 By David Ramsay Steele
$34.00
Email or call for price.

David Ramsay Steele, PhD, is a libertarian writer with a powerful underground reputation for producing caustic, entertaining, knowledgeable, and surprising arguments, often violently at odds with conventional thinking. For the first time, some of Dr. Steele’s “greatest hits” have been brought together in an anthology of provocative essays on a wide range of topics. The essays are divided into two parts, “More Popular than Scholarly” and “More Scholarly than Popular.”

“Scott Adams and the Pinocchio Fallacy,” Steele’s 2018 refutation of the popular claim that we might be living in a “simulated reality,” has been hailed as a totally irresistible debunking of that fallacy as promoted by The Matrix movie and by Scott Adams (among many pundits).

“What Follows from the Non-Existence of Mental Illness?” (2017) preserves the crucial insights of “psychiatric abolitionist” Thomas Szasz, while exposing Szasz’s major misconceptions.

In “The Bigotry of the New Atheism” (2014), Steele, himself an atheist, brings out the intolerant quality of the “New Atheists.” Steele powerfully argues that while “enthusiastic belief systems” may give rise to enormous atrocities, the historical evidence goes against the theory (promoted by Harris, Dawkins, and Hitchens) that these appalling outcomes are more likely when those belief systems include belief in God.

“Taking the JFK Assassination Conspiracy Seriously” (2003) has been reprinted many times, continues to be viewed online many thousands of times, and like many of Steele’s writings, keeps making converts. It is acknowledged to be the most persuasive brief popular statement of the Lone Nut theory.

“The Mystery of Fascism” (2001), which gives this collection its title, is still continually viewed and cited, for its demonstration that fascism arose directly out of far-left revolutionary Marxism and revolutionary syndicalism. Conventional ideologues of both right and left have been provoked by this highly readable piece to start thinking outside the box.

The earliest piece in this collection, “Alice in Wonderland” (1987) is a devastating critique of the Ayn Rand belief system and the Ayn Rand cult.

“Gambling Is Productive and Rational” (1997), mercilessly strips away the loose thinking which favors intolerance and prohibition of gambling. Steele argues that gambling adds to human well-being and ought to be completely legalized everywhere.

Other topics include the recovered memory witch hunt of the 1990s, the benefits of replacing democratic voting with selection of political positions by lottery, the unexpected results of research into the causes of human happiness, the reasons why Dexter (a TV show sympathetic to a psychotic serial killer) was politically “safe,” why economic growth can go on for ever, why the most popular moral argument against eating meat just doesn’t work, how Hillary Clinton could have won the presidency in 2016, why Friedrich Hayek is wrong about social evolution, the inevitable disappearance of market socialism, Robert Nozick’s muddled thinking about economics, and the proper way to view anti-consensus theories such as the Atkins Diet.

As an author, Dr. Steele is admired for his iconoclastic study of George Orwell’s thinking, Orwell Your Orwell: A Worldview on the Slab (2017), praised by Yuri Maltsev as “absolutely dazzling”; his popular exposition of atheism, Atheism Explained: From Folly to Philosophy (2008), not only admired by atheists but also frequently praised by believers for its fair-mindedness; and his demonstration of the practical impossibility of Marxian socialism, From Marx to Mises (1992). Dr. Steele is also co-author (with Michael Edelstein) of Three Minute Therapy: Change Your Thinking, Change Your Life (1997; second edition 2019) and Therapy Breakthrough: Why Some Psychotherapies Work Better than Others (2013).