Hugo Black's Pocket U.S. Constitution: 'Keep One on You All the Time' (Paperback) 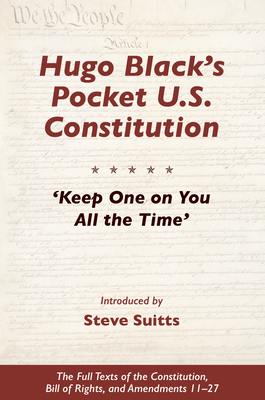 Remembered by some as the "most remarkable Supreme Court justice of the twentieth century," Justice Hugo L. Black was an early proponent of a judicial revolution that rebuilt America by expanding individual rights under the law and empowering the federal government to address America's economic and social problems. In large part through Black's persistence and influence, the Supreme Court's reinterpretation of the Bill of Rights and other key amendments helped to unleash human productivity, economic prosperity, and civil rights across the nation. Justice Black almost always carried a pocket edition of the Constitution. In his reverence for and belief in it, Black called it "the best document in the world" to guide a government "of the people, by the people, and for the people." He believed that everyone should own a copy of the Constitution. This modern pocket edition of the U.S. Constitution and its amendments is inspired by Justice Black's habit and example. The introduction is by biographer Steve Suitts, author of Hugo Black of Alabama: How His Roots and Early Career Shaped the Great Champion of the Constitution.