I Don't Smoke Enough to Quit: An Epic of Diminished Proportions (Paperback) 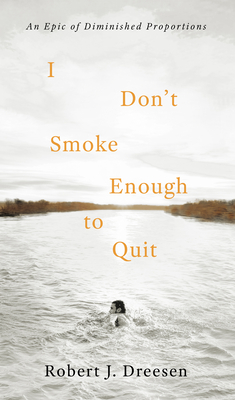 I Don't Smoke Enough to Quit: An Epic of Diminished Proportions (Paperback)

"I'm still marveling at not only the artistry of this book, the playful erudition of it, the sheer entertainment of the storytelling, but also the life (harrowing and joyous) and place that inspired it. If that life wouldn't create a writer, I don't know what would. The details are terrific . . . Dreesen has captured a time and a place perfectly."--Ladette Randolph, Editor-in-chief, Ploughshares

"And what I'm about to tell you can't be told
straight, so needs to be contained by form,
for the tale is messy and meandering,
if not downright weedy and windy
as all the characters who blew through our lives
back then and who we had to bend into,
grimacing and hunched over, holding hands
so as not to lose one another, sieve." In his imaginative memoir-in-verse, Robert Dreesen captures the stop-and-start rhythm of growing up in his family's 24-hour truck stop and drinkin' and dancin' bar alongside the Pan-American Highway in northeastern Nebraska. In a life that can be described as picaresque, Kenny, Rose, and their eight kids make their way through a world rich with farmers and ranchers, writers and painters, drunks and ne'er-do-wells, horses and dogs, imagined visits from poet-sages, insufficient money (but not poverty), fights, siblings, honor, booze, and the Missouri River.

Robert J. Dreesen is a publisher of scholarly books in New York City, where he has lived for the past thirty years. He is the author of 20th Century Tool Shed, a poetry collection. Dreesen returns to Nebraska every fall for an annual trip up the Missouri River with his brothers-in-bottle called "I Ain't Lewis and You Ain't Clark."