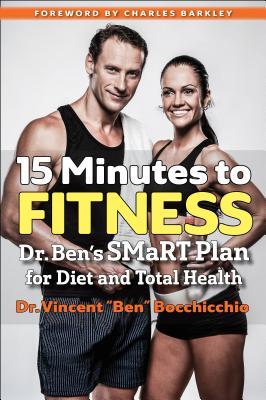 Everybody wants to lose weight (excess fat).  In fact, almost everyone has BUT almost no one maintains fat loss (weight creeps back more than 80% of the time).  People want to look better, feel better and younger and just be healthier and reduce the likelihood of heart disease, diabetes, Alzheimer’s, arthritis and some forms of cancer.  For all of these reasons (for fighting the weight loss battle), 15 Minutes to Fitness addresses these issues and provides safe, successful solutions.

If the advice we’ve been given for the last 50 years was legitimate, why then do we have 200 million Americans that are obese or overweight? Why are more than 100 million people diabetic or pre-diabetic?  Obviously, the PLAN isn’t working. With people spending billions annually to wage this war, why are we losing so badly?

The ANSWER: We are using the wrong methods based on bad science perpetrated by Big Medicine, Big Pharma (drug companies) and government agencies that are supported and unduly influenced by both. NOTE: If we could return obesity and diabetes numbers back to 1970 levels we would save one BILLION dollars a DAY in health care costs!!  It’s time we paid attention!!  It’s time you become your own expert, become informed and follow some simple science.

Dr. Ben’s 15 Minutes to Fitness exposes the flaws in the methods dictated by these entities and explains, in simple terms, how the human body developed genetically. This understanding leads the reader to a powerful system and guides them to successfully combat the fat related problems we face and maintain good health for a lifetime.

The irony in the situation is that so much time, money and effort have literally been wasted on weight loss when the evidence has been available for decades.  For almost 50 years, Dr. Ben Bocchicchio has produced unparalleled success in all populations applying his SMaRT System.  Dr. Ben suggests that everyone wants to get the biggest bang for their exercise and dieting time and effort and that is exactly what this book provides.

The SMaRT System is based on a fifteen minute, twice a week resistance exercise program and a carbohydrate controlled plan of eating.  Each aspect of the plan (meals and exercise) is detailed on a day by day, exercise by exercise basis.  The history of success that has accompanied the SMaRT plan includes a 10 pound fat loss and an 8 pound increase in muscle and bone tissue in just 5 weeks.  Dr. Ben calls this method a “A Five Week Metabolic Makeover”.  “That is really what all dieters and exercisers are really seeking: “Changing Metabolism” says Dr. Ben. “From fat “storer” to fat “burner” in 5 weeks” is the motto of 15 Minutes to Fitness.

Dr. Vincent “Ben” Bocchicchio has worked professionally in the fields of fitness and health for nearly 40 years. An acknowledged leader in the field, he has built his success by combining science with effective body conditioning and technology to produce optimum health, fitness, rehabilitation, and weight loss for every body type. In the 1970s, Dr. Ben developed slow resistance training, a fitness technique that changed the way people exercise.

Dr. Ben grew up in New York, where he became an award-winning athlete in high school and college. His involvement in athletics inspired him to pursue a career in exercise science. He graduated in 1971 from Ithaca College with a bachelor’s degree in physical education, health, and science. Dr. Ben went on to earn a master’s degree in exercise sciences from Florida Atlantic University, a doctorate in exercise physiology from North American University, and a doctorate in health services, with a specialization in physical exercise, from Walden University. He also completed a post-doctoral program at Columbia University in body composition analysis and weight management.

In 1973, Dr. Ben founded Sports Conditioning in Staten Island to condition professional and world-class athletes. Soon thereafter, he was approached by a wider scope of clientele seeking fitness and conditioning advice and program development. Dr. Ben applied the principles he developed for the athletic population, Slow MAximum Response Training or SMART ™, to develop programs for weight reduction, cosmetic enhancement, general fitness, and health and rehabilitation for the general population. In 1978, Dr. Ben was lauded by the N.Y. Press as “The Guru of Fitness.”

He has served as an expert consultant to professional and college teams, including The U.S. Olympic Committee, The National Football League, Major League Baseball, World Team Tennis, numerous major college athletic programs, and he served as the training program developer for Total Gym.™ In the early 1980s, Dr. Ben founded Cardio Management Systems and used resistance training as an integral part of Phase 2 Cardiac Rehabilitation. This was the first formally documented use of such exercise in the industry, and it is now commonplace protocol.

Following that experience, Dr. Ben became the exercise physiologist for Lehrman Back Centers in Miami Beach, Florida, a multi-phased, medical rehabilitation destination. He instituted his training protocol and became one of the leading consultants in the area of corporate fitness. During this time, he consulted for Cardio Fitness Centers and The Vista Health Clubs for corporate fitness projects, serving the fitness club at the top of the World Trade Center; NY Health and Racquet Clubs, Gold’s Gyms, and World Gym International. Dr. Ben was also commissioned by Lutheran Medical Center and Staten Island University as well as a number of other teaching hospitals as the exercise physiologist for health, wellness, and weight-loss programs.

In addition, Dr. Ben became associated with the famous weight-loss program owned by Sandoz Medical known as Opti Fast, which was made popular by Oprah Winfrey. He developed an adjunct exercise regimen called Opti Fit, using Opti Fast patients as subjects in his second doctoral dissertation clinical trial. In that work, he established for the first time in scientific literature that long-term weight loss could not be accomplished without the incorporation of exercise. His paper, “The Development of Obesity and Fat Related Disorders,” still stands as one of the only documents that accounts for the multi-dimensional nature of obesity and fat problems and addresses the proper application of exercise in every instance of origin.

Dr. Ben continues his research work in the fields of fitness, wellness, and health and has patented The FIRST Exercise System program and trademarked his SMART–Ex system, which is also licensed and in use throughout the world.

The owner and operator of numerous health and fitness facilities throughout the nation, Dr. Ben currently maintains a private fitness and health practice in Phoenix, Arizona. This successful business includes a metabolic makeover program that includes a proprietary exercise regimen, nutritional counseling, and EECP (Externally Enhanced Counter Pulsation). This program is conducted twice a week for approximately 45 minutes per session.

Professionally supervised and devised personal exercise programs are conducted and usually require 2 weekly sessions of about 20 minutes or less. These programs have been scientifically presented and have proven to be among the most effective available for body fat reduction, increased muscle tissue and metabolic rate levels, cardiovascular conditioning, and strength. All programs include sound, scientifically based and effectively healthy nutritional counseling.

Recently Dr. Ben has conducted studies in the fields of exercise and health and has presented and published those to International Meetings of The American College of Sports Medicine and The American Physiological Society. He has authored more than 200 articles, studies, and professional presentations on the subjects of health fitness and exercise and been cited in numerous books, articles, and studies as an expert and a reference source. In 2009 Dr. Ben presented a study using his Metabolic Makeover techniques and demonstrated a reversal of the diabetic profile in 12 weeks in Type II diabetics. He is currently working with Johns Hopkins Medical School as an investigator and consultant on two studies utilizing his slow resistance training concept for Juvenile Arthritic (JIA) patients and elderly patients with inflammatory disorders.

In his 60s, Dr. Ben continues to train regularly using his revolutionary SMART™ training system and maintains a high level of strength, significant muscle mass, and single digit body fat. He splits his time between Phoenix, Arizona and Coronado, California.