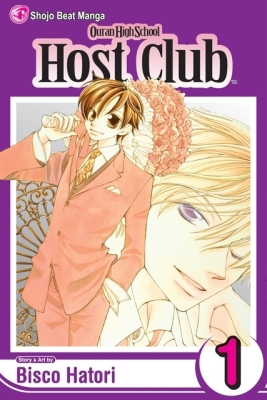 This is book number 1 in the Ouran High School Host Club series.

The uproarious comedy about a girl enlisted to work in a lavish host club!

In this screwball romantic comedy, Haruhi, a poor girl at a rich kids' school, is forced to repay an $80,000 debt by working for the school's swankiest, all-male club—as a boy! There, she discovers just how wealthy the six members are and how different the rich are from everybody else...

One day, Haruhi, a scholarship student at exclusive Ouran High School, breaks an $80,000 vase that belongs to the "Host Club," a mysterious campus group consisting of six super-rich (and gorgeous) guys. To pay back the damages, she is forced to work for the club, and it's there that she discovers just how wealthy the boys are and how different they are from everybody else.
Bisco Hatori made her manga debut with Isshun kan no Romance (A Moment of Romance) in LaLa DX magazine. The comedy Ouran High School Host Club is her breakout hit. When she's stuck thinking up characters' names, she gets inspired by loud, upbeat music (her radio is set to NACK5 FM). She enjoys reading all kinds of manga, but she's especially fond of the sci-fi drama Please Save My Earth and Slam Dunk, a basketball classic.