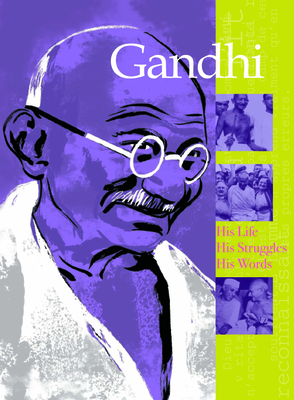 Speaking after Mahatma Gandhi's assassination, Albert Einstein remarked that in the future people would surely wonder that one such as Gandhi had walked among us. This is because Gandhi was an uncommon person in all respects. Outraged by human suffering, revolted by injustice, and guided by faith, Gandhi spent his life standing up for what he believed to be right. He did this with unfailing strength and equanimity, ready to give his life for the most humble in the belief that every human being should be allowed to live with dignity and freedom. Gandhi spoke up and out. He dissented and stood his ground, and through his actions he changed our world for the better. Gandhi's moral and spiritual courage have made him an excellent role model for each subsequent generation, and his example is as pressing today as ever.

This wonderfully engaging book consists of several parts: an eleven-page comic strip about Gandhi's life; a chronology; and twelve two-page chapters about different aspects of Gandhi's life, such as his early years, his life in London, Hinduism, nonviolence, and Indian independence. The book ends with a section of referenced quotes both from Gandhi and about him, followed by a list of recommended books and an index. In 2011 named a Skipping Stones Honor book.

lisabeth de Lambilly received her degree in history. She is a prolific author, specializing in nonfiction books for children. She is the mother of three and lives in France.

Born in France in 1979, S verine Cordier is now an award-winning illustrator. In 2004 her work was selected for exhibition at the Bologna Book Fair, and she also was awarded a prize for painting from the Institute of France. In 2009, she received the prestigious Chronos Prize.