Art of the Dead (Hardcover) 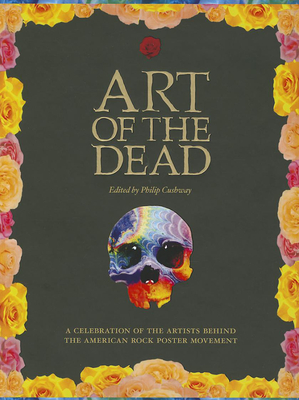 Art of the Dead (Hardcover)


Ships to Our Store in 1-5 Days
Inspired by The Grateful Dead and featuring interviews and profiles of key artists, Art of the Dead is the story of the vibrant, charismatic poster art that emerged from the streets of 1960s San Francisco.

The Art of the Dead showcases the vibrant, charismatic poster art that emerged from the streets of San Francisco in 1964 and 1966. It traces the cultural, political, and historical influences of posters as art back to Japanese wood blocks through Bell Epoque, on to the Beatniks, the Free Speech Movement, and the Acid Tests. Featuring interviews and profiles of the key artists, including Rick Griffin, Stanley "Mouse" Miller, Alton Kelley, Wes Wilson, and Victor Moscoso.

The book uses Grateful Dead as the vehicle to tell the story of poster art as The Dead were the band that ultimately proved to be the most substantive and engaged partner for the artists and hence featured the best art of any rock 'n' roll band ever. The book will follow a chronological evolution of the art from the band's origination in 1965 through Jerry Garcia's death in 1995.

The book is in four-color throughout, featuring iconic and rare images as well as extensive "process" material, including sketches, original art, blue lines, film, and printing plates that show how the art was created. It will also include essays by Greil Marcus, Peter Coyote, and Victoria Binder, as well as essays on the elements of the printing process from the original art to the final poster. Ultimately, the Art of the Dead makes the case that poster art is truly an original form of American fine art.
Phil Cushway is the owner of Artrock, the most extensive collection of rock posters in the world. He is widely credited with reviving interest in the original posters as well as spawning a whole new generation of artists. He has published over 500 prints for bands like The Beatles, Led Zeppelin, Jimi Hendrix, and The Grateful Dead. He has published all of the key artists including, Griffin, Moscoso, Mouse, Kelley, Wilson, Kozik, Armiski and Coop.