The Prince of the City: Giuliani, New York, and the Genius of American Life (Paperback) 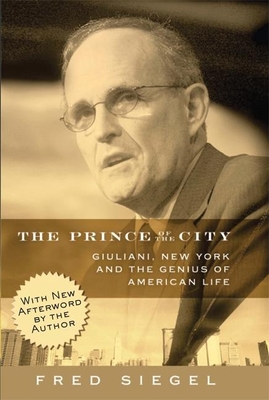 The Prince of the City: Giuliani, New York, and the Genius of American Life (Paperback)


Ships to Our Store in 1-5 Days
In this first post-9/11 account of the career of the man who established himself as America's Mayor in the dark days after America was attacked, Fred Siegel shows how Rudy Giuliani's successes in New York--restoring law and order, cutting taxes and radically reducing the welfare rolls--demonstrated that Gotham was indeed governable (a matter of doubt until his election) and that our major cities might again become vibrant and dynamic places to live after thirty years of middle-class flight. Someone who has worked with Giuliani as well as studied him, Siegel describes this colorful figure as an immoderate centrist, who, like the city he came to embody, evokes contradictory emotions. For some, he was a ruthless autocrat during his years at city hall; for others, he was a heroic figure who took on the vested interests that had dragged the city down. Siegel regards Guiliani as a shrewd tactician and artist of the possible who could have stepped out of the pages of Machiavelli's THE PRINCE. A self-promoting, self-absorbed man, the mayor made his own enormous ego serve the city's well-being. He promoted the virtues of duty and sacrifice, but was sometimes unable to honor these values in his personal life. He was suspicious of those outside his immediate circle, but he also placed this tribal ethos in the service of ideals that transcended New York's ethnic politics and business as usual. THE PRINCE OF THE CITY is at once a fascinating character study, a history of New York over the last forty years, and a classic inquiry into the issue of how cities thrive or die. Siegel's story culminates with a dramatic account of September 11, 2001, revealing how Giuliani's's eight years in office had prepared him and the city to rise to this tragic occasion. Siegel concludes with a look at how Guiliani's successor, Mayor Michael Bloomberg, has handled his legacy and at what the future might hold for America's Mayor.