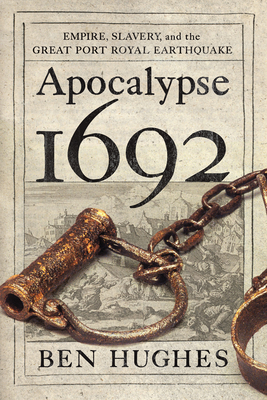 
Currently Unavailable
Built on sugar, slaves, and piracy, Jamaica’s Port Royal was the jewel in England’s quest for Empire until a devastating earthquake sank the city beneath the sea

A haven for pirates and the center of the New World’s frenzied trade in slaves and sugar, Port Royal, Jamaica, was a notorious cutthroat settlement where enormous fortunes were gained for the fledgling English empire. But on June 7, 1692, it all came to a catastrophic end. Drawing on research carried out in Europe, the Caribbean, and the United States, Apocalypse 1692: Empire, Slavery, and the Great Port Royal Earthquake by Ben Hughes opens in a post–Glorious Revolution London where two Jamaica-bound voyages are due to depart. A seventy-strong fleet will escort the Earl of Inchiquin, the newly appointed governor, to his residence at Port Royal, while the Hannah, a slaver belonging to the Royal African Company, will sail south to pick up human cargo in West Africa before setting out across the Atlantic on the infamous Middle Passage. Utilizing little-known first-hand accounts and other primary sources, Apocalypse 1692 intertwines several related themes: the slave rebellion that led to the establishment of the first permanent free black communities in the New World; the raids launched between English Jamaica and Spanish Santo Domingo; and the bloody repulse of a full-blown French invasion of the island in an attempt to drive the English from the Caribbean. The book also features the most comprehensive account yet written of the massive earthquake and tsunami which struck Jamaica in 1692, resulting in the deaths of thousands, and sank a third of the city beneath the sea. From the misery of everyday life in the sugar plantations, to the ostentation and double-dealings of the plantocracy; from the adventures of former-pirates-turned-treasure-hunters to the debauchery of Port Royal, Apocalypse 1692 exposes the lives of the individuals who made late seventeenth-century Jamaica the most financially successful, brutal, and scandalously corrupt of all of England’s nascent American colonies.
BEN HUGHES is the author of a number of books of history, including Conquer or Die: Wellington’s Veterans and the Liberation of the New World and The Siege of Fort William Henry: A Year on the Northwest Frontier (Westholme 2011). He is a lecturer and teacher trainer. He received his degree from Leeds University and has lived and worked in England and Colombia and currently resides in Santiago, Chile.
Praise for The Siege of Fort William Henry by Ben Hughes:
“An excellent book.”—Vae Victis (Paris)
“Comprehensively researched . . . an eye-opening drama of differing societies on a collision course.”—Military History
“A gripping story full of detail and biography . . . a page-turner that will entertain and inform.” —Journal of America’s Military Past

“Well-crafted narrative history. . . . an entertaining and substantial account of an underdiscussed era.”—Publishers Weekly

“Through this vivid account of seventeenth-century Jamaica, Ben Hughes reveals the diabolical nature of the Atlantic slave trade and the savage world it created. Combining colonial politics, buccaneering adventure, gentility and barbarity, it propels us on a terrifying, exhilarating voyage of discovery towards seismic catastrophe.”—Benjamin Woolley, author of Savage Kingdom: The True Story of Jamestown, 1607, and the Settlement of America