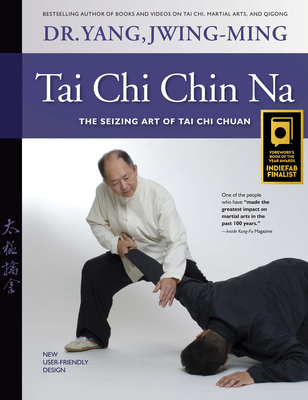 Chin Na is the art of seizing and controlling, it is a major element of all Chinese martial arts including Tai Chi Chuan.

Tai Chi Chin Na is one of the four main martial training categories of Tai Chi Chuan (the other three categories are striking, kicking, and wrestling/downing the opponent). Of all these four, Chin Na is the most effective, practical, powerful, and easiest to learn. Once you have mastered Tai Chi Chin Na, you will be able to apply the theory and techniques to any other martial style you practice. If you are a Tai Chi beginner, Tai Chi Chin Na could offer you a key to enter the door of martial Tai Chi.

This book provides a solid and practical approach to learning Tai Chi Chin Na accurately and quickly. You will learn specific techniques that flow from each movement, the proper hand forms to use when striking or pressing cavities, and the locations for targeting cavities on the body. Includes 858 photographs with motion arrows
peng, lu, ji, and an
41 Chin Na techniques for cai, lei, zhou, and kao
103 Chin Na applications for the 37 primary Tai Chi postures
17 Chin Na techniques for Tai Chi Pushing Hands

No matter your age or martial prowess, Tai Chi Chin Na is a necessary and enjoyable way to explore the depths of Tai Chi--a formidable martial art.
Dr. Yang, Jwing-Ming is a world authority on Tai Chi Chuan and Chinese martial arts. He maintains 55 schools in 18 countries. He is the author of over 35 books and 80 instructional videos, nominated as a person 'who has made the greatest impact on martial arts in the past 100 years'--Inside Kung Fu Magazine (1999). Dr. Yang, Jwing-Ming resides and teaches at his retreat center in Miranda, California.