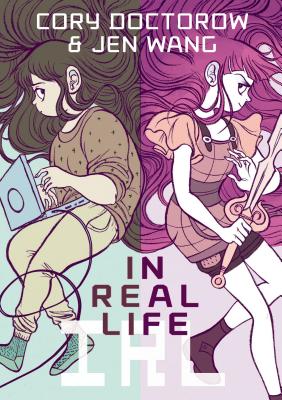 But things become a lot more complicated when Anda befriends a gold farmer -- a poor Chinese kid whose avatar in the game illegally collects valuable objects and then sells them to players from developed countries with money to burn. This behavior is strictly against the rules in Coarsegold, but Anda soon comes to realize that questions of right and wrong are a lot less straightforward when a real person's real livelihood is at stake.


This title has common Core connections.

Cory Doctorow is a regular contributor to the Guardian, Locus, and many other publications. He is a special consultant to the Electronic Frontier Foundation, an MIT Media Lab Research Associate and a visiting professor of Computer Science at the Open University. His award-winning novel Little Brother and its sequel Homeland were a New York Times bestsellers. His novella collection Radicalized was a CBC Best Fiction of 2019 selection. Born and raised in Canada, he lives in Los Angeles.

Jen Wang is a cartoonist, author and illustrator living in Los Angeles. She is the author of The Prince and the Dressmaker, Koko Be Good, and co-author of the New York Times Bestselling graphic novel In Real Life with Cory Doctorow. Her work has also appeared in Los Angeles Magazine, The Believer, Hazlitt, Slate, and McSweeney’s. She has also written for the Adventure Time and Lumberjanes comic series. She is the co-founder and organizer of the annual festival Comics Arts Los Angeles.

“A lovely graphic novel for gamer girls of all ages.” —Felicia Day, star and creator of The Guild

“Stunning artwork . . . An educational introduction offers further insight into gaming and the economies and political implications behind them.” —BCCB

“The illustrations of the game are vibrant and dynamic . . . The subject matter will have a built-in audience, and the appealing artwork will move this off the shelves.” —School Library Journal

“Online gaming and real life collide when a teen discovers the hidden economies and injustices that hide among seemingly innocent pixels . . . Through Wong's captivating illustrations and Doctorow's heady prose, readers are left with a story that's both wholly satisfying as a work of fiction and serious food for thought about the real-life ramifications of playing in an intangible world. Thought-provoking, as always from Doctorow.” —Kirkus Reviews

“Characters come to life through Wang's fluid forms and emotive faces, and her adroit shift in colors as the story moves between the physical and gaming worlds is subtle and effective.” —Publishers Weekly