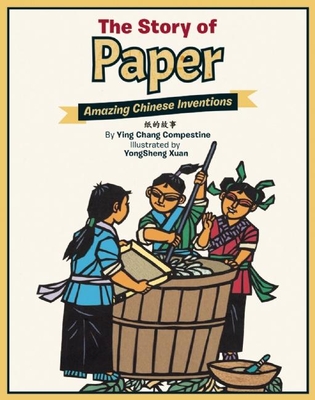 
Currently Unavailable
"With bold black outlines and vivid coloration... the artwork captures the action as the boys exercise their ingenuity."--School Library Journal The Kang boys don't want their teacher to write embarrassing notes on their hands anymore. Can they concoct a formula for what just may become a very useful school supply? This series, recounting how the creative Kang brothers discovered four of China's famed inventions, is redesigned to feature new bilingual simplified Chinese translations. " The ingenious Kang brothers, seen last in The Story of Kites, return for another entrepreneurial adventure. " - ALA Booklist.
Ying Compestine: Ying's dozens of children's books have won many awards, including spots on the best lists from the ALA, Bank Street, Book Sense, and New York Times. She visits schools and teaches workshops internationally. She has written for magazines such as Cooking Light, Self, Men's Health, and Martha Stewart's Whole Living. Her website is www.yingc.com. YongSheng Xuan illustrated the four volume Story of series. Educated at the renowned Central Arts and Crafts University in Beijing, China, he lives in Vancouver, Canada. His art has exhibited worldwide and appeared in Cricket magazine. His website is www.ysxuan.com.