James Baldwin: Later Novels (LOA #272): Tell Me How Long the Train's Been Gone / If Beale Street Could Talk / Just Above My Head (Library of America James Baldwin Edition #3) (Hardcover) 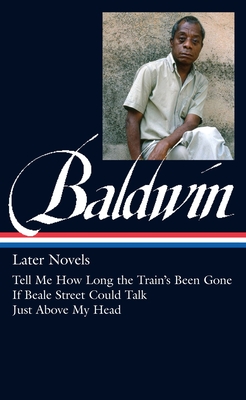 James Baldwin: Later Novels (LOA #272): Tell Me How Long the Train's Been Gone / If Beale Street Could Talk / Just Above My Head (Library of America James Baldwin Edition #3) (Hardcover)

This is book number 3 in the Library of America James Baldwin Edition series.

The Library of America completes its edition of the collected fiction of the literary voice of the Civil Rights era with this volume gathering three revealing later works of the 1960s and ’70s.

With such landmark novels as Go Tell It on the Mountain, Giovanni’s Room, and the essay collections Notes of a Native Son and The Fire Next Time, James Baldwin established himself as the indispensable voice of the Civil Rights era, a figure whose prophetic exploration of the racial and sexual fissures in American society raised the consciousness of American readers. But by the late 1960s and ’70s many regarded Baldwin as being out of sync with the political and social currents transforming America: too integrationist for Black Arts Movement writers and others on the Left, yet too “pessimistic” for many white readers, and as a result his later novels have never received the consideration given his earlier fiction. Sober in outlook but ambitious in scope, these works show Baldwin responding with his signature passion—for music, for justice, for life—and searching intelligence to the new realities of a rapidly changing cultural landscape, as the Movement era gives way to the age of identity politics that we still live in today. This culminating volume in the Library of America edition of his fiction illustrates how Baldwin continues to be relevant in twenty-first-century America, especially in his dramatizing of the unequal treatment of black men by the police and the justice system, his nuanced depictions of the black family, and his explorations of sexuality.

LIBRARY OF AMERICA is an independent nonprofit cultural organization founded in 1979 to preserve our nation’s literary heritage by publishing, and keeping permanently in print, America’s best and most significant writing. The Library of America series includes more than 300 volumes to date, authoritative editions that average 1,000 pages in length, feature cloth covers, sewn bindings, and ribbon markers, and are printed on premium acid-free paper that will last for centuries.
With the novel Go Tell It on the Mountain (1953), a distillation of his own experiences as a preacher’s son in 1930s Harlem, and the essay collection Notes of a Native Son (1955), James Baldwin (1924-1987) established himself as a prophetic voice of his era. Some such voices may grow fainter with the passage of time, but Baldwin remains an inescapable presence, not only a chronicler of his epoch but a thinker who helped shape it.

Darryl Pinckney is the author of the novel High Cotton (1992) and the critical study Out There: Mavericks of Black Literature (2002). He is a frequent contributor to The New York Review of Books, among other publications.