The Peanuts Papers: Writers and Cartoonists on Charlie Brown, Snoopy & the Gang, and the Meaning of Life: A Library of America Special Publication (Hardcover) 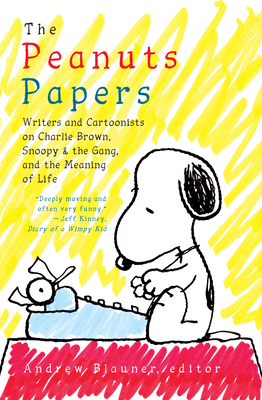 The Peanuts Papers: Writers and Cartoonists on Charlie Brown, Snoopy & the Gang, and the Meaning of Life: A Library of America Special Publication (Hardcover)

Over the span of fifty years, Charles M. Schulz created a comic strip that is one of the indisputable glories of American popular culture—hilarious, poignant, inimitable. Some twenty years after the last strip appeared, the characters Schulz brought to life in Peanuts continue to resonate with millions of fans, their beguiling four-panel adventures and television escapades offering lessons about happiness, friendship, disappointment, childhood, and life itself.

In The Peanuts Papers, thirty-three writers and artists reflect on the deeper truths of Schulz’s deceptively simple comic, its impact on their lives and art and on the broader culture. These enchanting, affecting, and often quite personal essays show just how much Peanuts means to its many admirers—and the ways it invites us to ponder, in the words of Sarah Boxer, “how to survive and still be a decent human being” in an often bewildering world. Featuring essays, memoirs, poems, and two original comic strips, here is the ultimate reader’s companion for every Peanuts fan.

“If you obsessed over the comic strip Peanuts as a child — I mean: You lived and died with those characters . . . hark, the herald angels sing: You are not alone!” —James Rosen, National Review

“This charming, searching book . . . is one of the more spiritual books I’ve read in years.” —John Williams, The New York Times

“Deeply personal and often moving, The Peanuts Papers shine a light on the enormous impact the work of  Charles M. Schulz has had on a generation of writers and artists . . . and on the world as a whole.” —Jeff Kinney, author of Diary of a Wimpy Kid

"The Peanuts Papers supports the idea that we return to Peanuts for the depth and the recognition and the truth — and sometimes simply because, as [Kevin] Powell writes in reference to his own depression, Schulz and Peanuts still have the capacity to bring us 'tremendous happiness to this very day.'”  — Michael Cavna, The Washington Post

"“Peanuts” was one of the most influential American comics. A new collection of meditative, charming essays explores the strip’s cultural impact." — Christian Science Monitor

“A heartwarming tribute to Schulz’s inimitable strip and the influence it had on its everyday audience.” —Publishers Weekly (Starred Review)

"Anyone who enjoyed the comics or TV specials will recognize their experiences in these pages and have their appreciation of Schulz’s genius renewed." —Library Journal (Starred Review)

“Top-flight...Essential reading for Peanuts fans and an appealing collection of personal writing for any reader.” —Kirkus Reviews

“A diverse and illustrious line-up of authors, whose thoughtful and heartfelt accolades attest to Schulz’s enduring vision and his strip’s abiding place in American culture.” — Booklist

"Reading this book was like finding a lost album of childhood photographs. It's an unexpected powerhouse of a book, and if Peanuts was part of your childhood, it will knock you out." --Caitlin Flanagan

"Good grief! Who knew that a mere ( if admittedly great) comic strip, could inspire such great writing? The Peanuts Papers is an anthology unlike any other, to be treasured and earmarked." —Daphne Merkin

“Writers of every age and stripe bring their own memories and imaginations to this classic strip—and in so doing so, show just how much they were inspired by it.”  —Cullen Murphy