Rachel Carson: The Sea Trilogy (LOA #352): Under the Sea-Wind / The Sea Around Us / The Edge of the Sea (Hardcover) 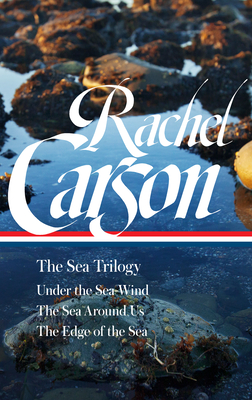 Rachel Carson: The Sea Trilogy (LOA #352): Under the Sea-Wind / The Sea Around Us / The Edge of the Sea (Hardcover)


Available at One of Our Locations
Pioneering environmentalist Rachel Carson explores the wonders of the Earth's oceans in these classics of American science and nature writing.

Rachel Carson is perhaps most famous as the author of Silent Spring, but she was first and foremost a "poet of the sea" and the three books collected in this deluxe Library of America volume are classics of American science and nature writing.

Under the Sea-Wind (1941), Carson's lyrical debut, offers an intimate account of maritime ecology through the eyes of three of the ocean's denizens, the individual lives of sanderling, mackerel, and eel dramatically intertwined in the enduring ebb and flow of the tides.

The Sea Around Us (1951)--a winner of the National Book Award--draws on a wealth of oceanographic, meteorological, biological, and historical research to present its subject on a grand, biospheric scale, revealing not only many mysteries of the still-unfathomed depths, but a reverence for the sea as a source of global climate and of life itself.

Concluding Carson's "sea trilogy," The Edge of the Sea (1955) explores the habits of the many small creatures that live on shorelines and in tidepools accessible to any beachcomber: part identification guide, part hymn to ecological complexity, it is a book that conveys the "sense of wonder" in nature for which Carson is justly celebrated.

At a moment when overfishing, pollution, and global warming are causing catastrophic changes to marine environments worldwide, Carson's lyrically detailed accounts of these environments offer a timely reminder of their beauty, fragility, and immense consequence for human life.
Rachel Carson (1907-1964) was born on a family farm near Springdale, Pennsylvania. She earned a master's in zoology at Johns Hopkins before taking a job with the U.S. Bureau of Fisheries. She published Under the Sea-Wind (1941), The Sea Around Us (1951, winner of the National Book Award), and The Edge of the Sea (1955). Silent Spring (1962), her exposé of the disastrous ecological effects of pesticide use, was an international bestseller.

A research biologist and cancer survivor, Sandra Steingraber was inspired to activism by Rachel Carson's Silent Spring, becoming one of America's leading environmental writers and antipollution advocates. Her books include Living Downstream: An Ecologist's Personal Investigation of Cancer and the Environment (1997), Having Faith: An Ecologist's Journey to Motherhood (2001), and Raising Elijah: Protecting Our Children in an Age of Environmental Crisis (2011).
"Carson's Sea Trilogy is as gratifying to read today as it ever was. . . .  Each book achieves that rare feat of popular science: crafting a narrative so deceptively simple as to entice readers in and, once there, enchant them enough to stay as much for the prose as for the delicious morsels of data. . . . One cannot help but think of Carson working late into the night, crafting her perfect sentences with the precision of a jeweler. She was a scientist, yes, but also a disciple of the sea. These books are devotional works." —Scientific American

"The mysteries [Carson] pondered are oceans-deep, which is why her sea books, all these years later, remain an inexhaustible treasure, too." —The Wall Street Journal