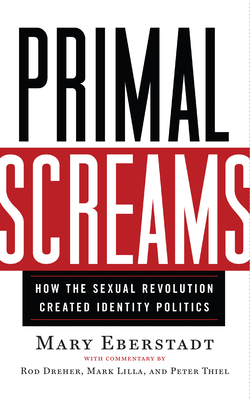 Who am I? The question today haunts every society in the Western world.

Legions of people—especially the young—have become unmoored from a firm sense of self. To compensate, they join the ranks of ideological tribes spawned by identity politics and react with frenzy against any perceived threat to their group.

As identitarians track and expose the ideologically impure, other citizens face the consequences of their rancor: a litany of “isms” run amok across all levels of cultural life; the free marketplace of ideas muted by agendas shouted through megaphones; and a spirit of general goodwill warped into a state of perpetual outrage.

How did we get here? Why have we divided against one another so bitterly? In Primal Screams, acclaimed cultural critic Mary Eberstadt presents the most provocative and original theory to come along in recent years. The rise of identity politics, she argues, is a direct result of the fallout of the sexual revolution, especially the collapse and shrinkage of the family.

As Eberstadt illustrates, humans from time immemorial have forged their identities within the structure of kinship. The extended family, in a real sense, is the first tribe and first teacher. But with its unprecedented decline across a variety of measures, generations of people have been set adrift and can no longer answer the question Who am I? with reference to primordial ties. Desperate for solidarity and connection, they claim membership in politicized groups whose displays of frantic irrationalism amount to primal screams for familial and communal loss.

Written in her impeccable style and with empathy rarely encountered in today’s divisive discourse, Eberstadt’s theory holds immense explanatory power that no serious citizen can afford to ignore. The book concludes with three incisive essays by Rod Dreher, Mark Lilla, and Peter Thiel, each sharing their perspective on the author’s formidable argument.

Mary Eberstadt holds the Panula Chair at the Catholic Information Center and is a senior fellow with the Faith and Reason Institute. She is the author of several books, including Primal Screams and How the West Really Lost God, and has written widely for newspapers, magazines, and journals.

"Primal Screams is and should be controversial. It is also quite brilliant. I can think of few books in recent memory that eschew academic and journalistic orthodoxy in as cutting and well defended a way. Anyone interested in the roots of our current identity-driven dilemmas would be remiss in not reading it."—The Federalist

“Eberstadt is a shrewd, thoughtful analyst of our culture, and scrutinizes her subject through a nonpartisan lens….Primal Screams is, then, important for readers of all political and ideological complexions.”—Washington Examiner

"Mary Eberstadt’s thesis is exactly right, and she backs it up with evidence."—Public Discourse

“Eberstadt’s work is not only for conservatives but also for everyone who thinks about contemporary society and finds himself puzzled, worried, or in a foreboding frame of mind about the alarming spike in identity politics as well as suicide, depression, substance abuse, and loneliness.”—National Review

“Vintage Eberstadt: clearly argued with conviction....This is a good and helpful book, and the responses of Dreher and company are thought-provoking and constructive....Eberstadt’s greatest strength is her consistent calm and compassionate tone. As such, she offer us a model for how political discussion should be pursued.”—The Gospel Coalition

"I wait for Mary Eberstadt’s books the way some people used to wait for the next Harry Potter installment."—Fr. John Hollowell, Pastor of Annunciation and St. Paul's Catholic Church

"Primal Screams provides a cogent, prophetic take on how and why it is that so many well-educated, materially well-off people — after all, this is mostly a Western political development  — do not seem to know who they are."—Black Christian News Network One

"A cogent, prophetic take on how and why it is that so many well-educated, materially well-off people...do not seem to know who they are."—The Christian Post

"Mrs. Eberstadt’s study is a welcome contribution to the current crisis in an increasingly secularized society. It is an attempt to pick away at a problem that is a vast tangle of personal motivations, subconscious drives and desires, societal currents, historical trends, socio-economic factors, and the irrational reactions of the mob. She’s done well to hone in on a crucial aspect to shed light on the problem."—Dwight Longenecker, The Imaginative Conservative

“Mary Eberstadt’s book is a thought provoking, informed lead-in to a discussion that the world urgently needs to have.”—Margaret Hickey, Position Papers

“A well-researched, powerfully argued, and profound account of the deepest sources of our current cultural crises. Wise and courageous, Mary Eberstadt has written an indispensable book for understanding our time.”—Leon R. Kass, professor emeritus, Committee on Social Thought, The University of Chicago

“Primal Screams is a deeply thought-provoking reflection on human nature and the fate of our republic.”—Mary Ann Glendon, Learned Hand Professor of Law, Harvard University

"Some basic questions of identity have overtaken Western politics in the 21st century, and before they can be addressed, they must be understood. With her characteristic clarity and breadth of learning, Mary Eberstadt offers a powerfully persuasive guide to why we are beset by these challenges, and how to take them on."—Yuval Levin, editor of National Affairs

“Mary Eberstadt proves, yet again, that she is one of America's most insightful—as well as compassionate—social analysts.”—George Weigel, Distinguished Senior Fellow and William E. Simon Chair in Catholic Studies, Ethics and Public Policy Center

"Mary Eberstadt understands ‘identity politics’ better than its practitioners—and any of its critics to date. She takes seriously the question of why so many people feel a need for the sense of belonging that identity politics seeks to provide. Her answer is terrifying—a loss that human beings of modern times have suffered, but of which we have been almost entirely unaware. Until now.”—Tod Lindberg, author of The Heroic Heart: Greatness Ancient and Modern

“It is scarcely a foregone conclusion that our society will return to sanity on questions of sexual morality and marriage. But if we do, then prophets like Mary Eberstadt will be celebrated in song and story.”—Robert P. George, McCormick Professor of Jurisprudence, Princeton University

“In Primal Screams, Mary Eberstadt responds to the deepest cries of the wounded souls of our time. Read it and share it.”—Kathryn Jean Lopez, National Review Institute