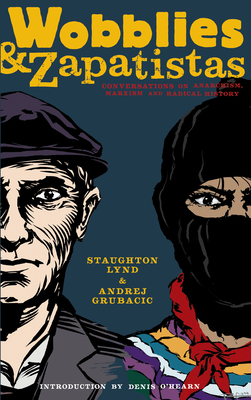 By Staughton Lynd, Andrej Grubacic
$20.00
Email or call for price

Wobblies and Zapatistas offers the reader an encounter between two generations and two traditions. Andrej Grubacic is an anarchist from the Balkans. Staughton Lynd is a lifelong pacifist, influenced by Marxism. They meet in dialogue in an effort to bring together the anarchist and Marxist traditions, to discuss the writing of history by those who make it, and to remind us of the idea that "my country is the world." Encompassing a Left libertarian perspective and an emphatically activist standpoint, these conversations are meant to be read in the clubs and affinity groups of the new Movement.

The authors accompany us on a journey through modern revolutions, direct actions, anti-globalist counter summits, Freedom Schools, Zapatista cooperatives, Haymarket and Petrograd, Hanoi and Belgrade,  "intentional" communities, wildcat strikes, early Protestant communities, Native American democratic practices, the Workers' Solidarity Club of Youngstown, occupied factories, self-organized councils and soviets, the lives of forgotten revolutionaries, Quaker meetings, antiwar movements, and prison rebellions. Neglected and forgotten moments of interracial self-activity are brought to light. The book invites the attention of readers who believe that a better world, on the other side of capitalism and state bureaucracy, may indeed be possible.

Staughton Lynd taught American history at Spelman College and Yale University. He was director of Freedom Schools in the 1964 Missisipppi Freedom Summer. An early leader of the movement against the Vietnam War, he was blacklisted and unable to continue as an academic. He then became a lawyer, and in this capacity has assisted rank-and-file workers and prisoners for the past thirty years. He has written, edited, or co-edited with his wife Alice Lynd more than a dozen books.

"An exquisite contribution to the literature of human freedom, and coming not a moment too soon."  —David Graeber, author, Fragments of an Anarchist Anthropology and Direct Action: An Ethnography

"From the Zapatista movement in San Cristobal, Chiapas, to the steel mills of rural Ohio, [Staughton] reminds us that when it's all over, said and done, what truly matters the most is our willingness to reach out and love somebody.”  —Bomani Shakur a k.a. Keith Lamar, death row, Ohio State Penitentiary

"Here we have the best of a non-dogmatic Marxism listening to a most creative and humane anarchism."  —Margaret Randall, author, Sandino's Daughters and When I Look Into the Mirror and See You

"Lynd and Grubacic's considerations of these institutions, and their ideas for transcending the society that creates them, are excellent. Their conception of Marxism and anarchism as two hands working together, one devoted to analysis, the other to practice, is terse and elegant . . . a great addition to intellectual-activist literature."  —NACLA Report on the Americas

"Presents an alternative history of social movements in North America that makes historical events come alive on the page and connect to today's activist efforts for change."  —Hour

"Packed with conversations about issues that directly impact modern radicals and visionaries. For this alone, it is well-worth the time investment to read it."  —Theory in Action Special Issue: Building Bridges Between Anarchism and Marxism