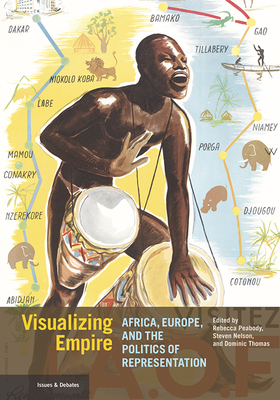 An exploration of how an official French visual culture normalized France’s colonial project and exposed citizens and subjects to racialized ideas of life in the empire.

By the end of World War I, having fortified its colonial holdings in the Caribbean, Latin America, Africa, the Indian Ocean, and Asia, France had expanded its dominion to the four corners of the earth. This volume examines how an official French visual culture normalized the country’s colonial project and exposed citizens and subjects alike to racialized ideas of life in the empire. Essays analyze aspects of colonialism through investigations into the art, popular literature, material culture, film, and exhibitions that represented, celebrated, or were created for France’s colonies across the seas.

These studies draw from the rich documents and media—photographs, albums, postcards, maps, posters, advertisements, and children’s games—related to the nineteenth- and twentieth-century French empire that are held in the Getty Research Institute’s Association Connaissance de l’histoire de l’Afrique contemporaine (ACHAC) collections. ACHAC is a consortium of scholars and researchers devoted to exploring and promoting discussions of race, iconography, and the colonial and postcolonial periods of Africa and Europe.

Rebecca Peabody is head of Research Projects and Programs at the Getty Research Institute.

Steven Nelson is the dean of the Center for Advanced Study in the Visual Arts at the National Gallery of Art in Washington, DC. He was previously professor of African and African American art history at the University of California, Los Angeles.

Dominic Thomas is Madeleine L. Letessier Professor and chair of the Department of European Languages and Transcultural Studies at the University of California, Los Angeles.

"Visualizing Empire delves deeply into colonial image making and the difficult issues of conquest, race, media, and cultural stereotyping through a peerless collection of visual artifacts of colonial imagery. The authors frame these works within a multidisciplinary context that at once deepens, broadens, and enhances our knowledge of French colonialism and how it worked both in the metropole and in the complex geographical and cultural worlds in which the French were engaged. Through a close examination of these forms—architecture, mapping, dress, caricature, zoos, fairs, games, advertising, and localized sites of encounter, Visualizing Empire provides us a seat at the table to experience up close the ever expanding thirst of empire that shaped the modern world."
—Suzanne Preston Blier, Allen Whitehill Professor of Fine Arts and of African and African American Studies, Harvard University

“Visualizing Empire introduces a stunning archive, now at the Getty Research Institute, that will be a powerful addition to the study of art and visual culture of early twentieth-century French colonialism. Utilizing a diversity of artifacts—from toys to maps—the authors demonstrate the centrality of material culture in the Republic's imperial ambitions to build consensus at home and to justify its racial, political, and economic dominance in the countries that comprised its colonies. This groundbreaking anthology enacts the importance of rigorous collaborative scholarship as itself a subversive corrective to a past that continues to haunt the present.”

“This collection of essays shows how images of France’s colonies were conveyed through photographs, maps, postcards, and even children’s games—and how these shaped ideas about race and colonised peoples.”

“Grounded in the belief that society cannot dismantle colonialist ideology until its foundations are understood, Visualizing Empire is an invaluable teaching tool.”

“This book is a valuable resource for research into postcolonial studies and propaganda in material culture.”
— Amy Lazet

“Visualizing Empire: Africa, Europe, and the Politics of Representation offers an engaging and often revelatory analysis of visual materials produced by the French government and commercial enterprises to promote France’s colonial project both at home and abroad.”