The Secret Language of Dogs: Unlocking the Canine Mind for a Happier Pet (Paperback) 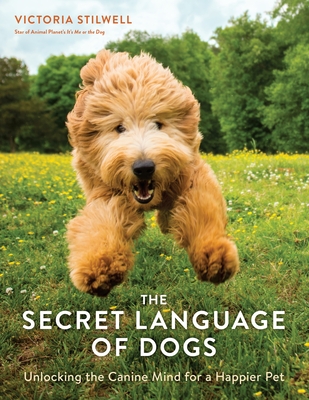 The Secret Language of Dogs: Unlocking the Canine Mind for a Happier Pet (Paperback)


Ships to Our Store in 1-5 Days
The star of Smithsonian Channel’s Dogs With Extraordinary Jobs reveals how to both interpret and “speak” the hidden language of dogs.

Recent studies into the minds of canines show that they have a rich social intelligence and a physical and vocal language as complex and subtle as our own. In this fun and fascinating guide, world-renowned trainer Victoria Stilwell explores the inner world of dogs. This book is your guide to understanding your pooch, communicating effectively, strengthening your bond, and helping dogs learn in the most effective way possible so they feel confident navigating the human world with success.

Along the way, you’ll learn the answers to questions such as:
• What do different tail wags mean?
• What does being right-pawed say about my dog’s personality?
• How can I tell the difference between boredom barking and warning barking?
• What does it mean when my dog spins around, arches his back, or gives me the whale eye?
• Do dogs feel guilt?
• How do dogs perceive human faces?
• Why do some scientists think dogs’ emotional experience is even greater than ours?

Filled with adorable full-color photographs and instructive illustrations, this insightful “dog decoder” will soon make you dog’s best friend.
Victoria Stilwell is best known for her role as the host of Animal Planet's hit TV series It's Me or the Dog. Born and raised in Wimbledon, England, she has also served as a judge on CBS' Greatest American Dog and is involved with rescue groups around the world. Stilwell has been featured in numerous magazines and journals, has appeared on countless television and radio shows in the United States, Europe, and Asia, and her popular Positively Podcast series is heard by listeners worldwide. Named 2009's Dog Trainer of the Year at the Purina Pro Plan Dog Awards, Stilwell lives in Atlanta, Georgia, with her husband, daughter, andtwo rescue dogs.
“Dogs don’t speak our language, but Victoria Stilwell is the perfect translator.”
—Dr. Ádám Miklósi, founder of the Family Dog Research Project