The Language of Loss: Poetry and Prose for Grieving and Celebrating the Love of Your Life (Paperback) 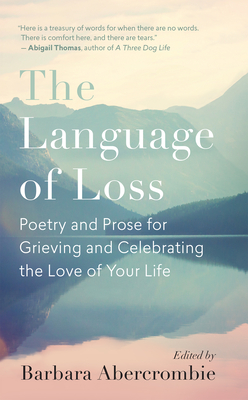 The Language of Loss: Poetry and Prose for Grieving and Celebrating the Love of Your Life (Paperback)


Available at One of Our Locations
When Barbara Abercrombie's husband died, she found the language of condolence irritating, no matter how well intended. "My husband had not gone to a better place as if he were off on a holiday. He had not passed like clouds overhead, nor was he my late husband as if he'd missed a train. I had not lost him as if I'd been careless, and for sure, none of it was for the best." She yearned instead for words that acknowledged the reality of death, spoke about the sorrow and loneliness (and perhaps even guilt and anger), and might even point the way toward hope and healing. She found those words in the writings gathered here.

The Language of Loss is a book to dip into and read slowly, a collection of poems and prose to lead you through the phases of grief. The selections follow an arc that mirrors the path of many mourners -- from abject loss and feeling unmoored, to glimmers of promise and possibility, through to gratitude for the love they knew. These writings, which express what often feels ineffable, will accompany those who grieve, offering understanding and solace.
Barbara Abercrombie has published fifteen books, including Courage & Craft: Writing Your Life into Story and A Year of Writing Dangerously: 365 Days of Inspiration and Encouragement. She teaches in the Writer's Program at UCLA Extension and lives in Los Angeles and Lake Arrowhead, California.