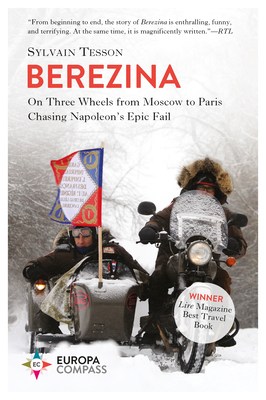 Take four friends, put them on two Ural motorcycles (complete with sidecars), send them off on a 2,500-mile odyssey retracing history's most famous retreat, add what some might consider an excessive amount of Vodka, and you've got Sylvain Tesson's Berezina, a riotous and erudite book that combines travel, history, comradery, and adventure.

The retreat of Napoleon's Grande Arm e from Russia culminated, after a humiliating loss, with the crossing of the River Berezina, a word that henceforth became synonymous with unmitigated disaster for the French and national pride for the Russians. Two hundred years after this battle, Sylvain Tesson and his friends retrace Napoleon's retreat, along the way reflecting on the lessons of history, the meaning of defeat, and the realities of contemporary Europe. A great read for history buffs and for anyone who has ever dreamed of an adventure that is out of the ordinary.

Sylvain Tesson has traveled the world by bicycle, train, horse, and motorcycle, and on foot. His bestselling accounts of his travels have won numerous prizes, including the Dolman Best Travel Book Award. Berezina is his first book to appear in English. Katherine Gregor translates from Italian, Russian and French. She is also a playwright and a fiction writer and maintains a regular blog at scribedoll.wordpress.com.