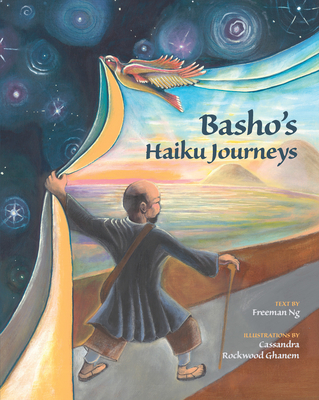 The 17th-century Japanese poet Matsuo Basho practically invented the haiku. He's most famous for his travel journals. But how did he come to be such a traveler in the first place? This delightful volume--written entirely in haiku and illustrated with vibrant hand-painted scenes taken directly from the poet's written travelogues--tells the true story of Basho's decision to abandon his comfortable city life and of the five great journeys he then took through the length and breadth of Japan.

Freeman Ng is the author of Joan, a YA retelling of the life of Joan of Arc that Horn Book Award-winning author Tim Wynne-Jones called, An intimate meditation, textured and ingenious, and of Who Am I?, a personalizable picture book that comes in 20 different versions. Starting in 2010, Freeman wrote and posted one haiku every day for five years, and in 2016 published Haiku Diem 1, a collection of the first year's best haiku. Cassandra Rockwood-Ghanem is a San Francisco Bay Area-based poet and illustrator. Her award-winning visual art has been exhibited in journals and galleries throughout the United States and beyond. Her poems and creative nonfiction have been published in The New Delta Review, Rip Rap, Hawaii Review, The Lifted Brow, For Women Who Roar, The Write Launch, and elsewhere. Cassandra holds a BA from California Institute of Integral Studies and an MFA from California College of the Arts. This is her first book.