A Bridge of Words: Views Across America and Japan (Paperback) 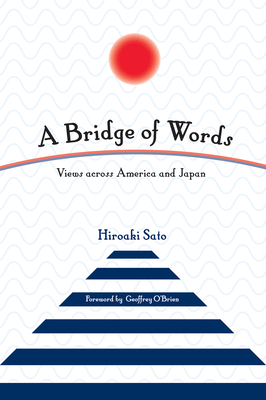 A Bridge of Words: Views Across America and Japan (Paperback)


Ships to Our Store in 1-5 Days
Prolific, award-winning translator of classical and modern Japanese poetry Hiroaki Sato recorded his thoughts on American society in mainly two columns across 30-plus years, collected here for the first time.This anthology of over 60 of Sato's commentaries reflect the writer's wide-ranging erudition and his unsentimental views of both his native Japan and his adopted American homeland. Broadly he looks at the Pacific War and its aftermath and at war (and our love of it) in general, at the quirks and curiosities of the natural world exhibited by birds and other creatures, at friends and mentors who surprised and inspired, and finally at other writers and their works, many of them familiar--the Beats and John Ashbery, for example, and Mishima--but many others whose introduction is welcome. Sato is neither cheerleader nor angry expatriate. Remarkably clear-eyed and engaged with American culture, he is in the business of critical appraisal and translation, of taking words seriously, and of observing how well others write and speak to convey their own truths and ambitions.
Hiroaki Sato is a prolific, award-winning translator of classical and modern Japanese poetry into English. American poet Gary Snyder has called Sato" perhaps the finest translator of contemporary Japanese poetry into American English."Hiroaki Sato has received several translation prizes. Among them are the PEN America prize, with Burton Watson, for From the Country of Eight Islands: An Anthology of Japanese Poetry (1981); the Japan-United States Friendship Commission translation prize for Breeze Through Bamboo: Kanshi of Ema Saikō (1997) and for The Silver Spoon (2015).He has written columns for a dozen publications, among them The Mainichi Daily News ("Here and Now--in New York") from 1984 to 1989 and for The Japan Times ("The View from New York") from 2000 to 2017.