Margin of Victory: Five Battles that Changed the Face of Modern War (Hardcover) 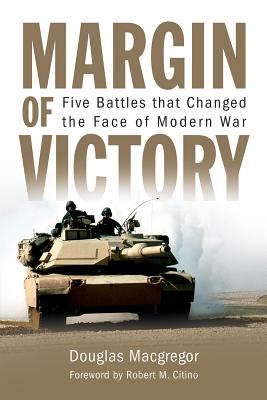 Margin of Victory: Five Battles that Changed the Face of Modern War (Hardcover)

In Margin of Victory Douglas Macgregor tells the riveting stories of five military battles of the twentieth century, each one a turning point in history. Beginning with the British Expeditionary force holding the line at the Battle of Mons in 1914 and concluding with the Battle of Easting in 1991 during Desert Storm, Margin of Victory teases out a connection between these battles and teaches its readers an important lesson about how future battles can be won.

Emphasizing military strategy, force design, and modernization, Macgregor links each of these seemingly isolated battles thematically. At the core of his analysis, the author reminds the reader that to be successful, military action must always be congruent with national culture, geography, and scientific-industrial capacity. He theorizes that strategy and geopolitics are ultimately more influential than ideology. Macgregor stresses that if nation-states want to be successful, they must accept the need for and the inevitability of change. The five warfighting dramas in this book, rendered in vivid detail by lively prose, offer many lessons on the tactical, operational, and strategic levels of war.