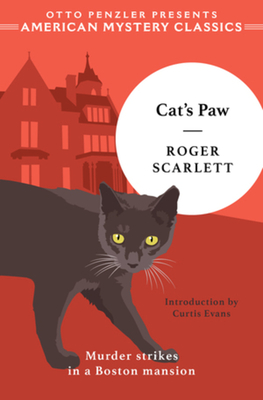 When a wealthy bachelor is murdered in his baroque Boston mansion, a bizarre clue holds the key to whodunnit

Martin Greenough’s walled-off mansion is the last remaining holdout in the Boston parkland known as the Fenway—and the fact that it eluded condemnation by the city is a testament to the elderly bachelor’s great wealth. Childless and nearing the end of his life, he surrounds himself with only his cat, his servants, and a friend, Mrs. Warden—to say nothing of the circle of extended family members whose lives he both subsidizes and rules from afar, the nieces and nephews who all seem to be more fond of Uncle Mart’s money than they are of his character.

On the eve of his birthday, Greenough requests the presence of his heirs at his home, insisting that he has something important to discuss. Before that discussion can take place, though, the man is murdered in his study. In one way or another nearly everyone there would benefit by his death, and none gathered seem terribly upset by it, so finding the culprit is no easy task for Inspector Kane of the Boston PD. But as he untangles the threads and unburies dark family secrets, the discovery of a bizarre clue might hold the key to solving the crime.

A classical “closed circle” mystery featuring a colorful cast of characters, Cat’s Paw exemplifies the puzzling, house-bound tales for which Roger Scarlett is remembered today. It is sure to delight any fan of pure, Golden Age detective stories—especially those with a love of architecturally-focused plots.

Includes discussion guide questions for use in book clubs.

Roger Scarlett was the pen name of Dorothy Blair and Evelyn Page, whose five novels are remembered today for their emphasis on detailed maps and puzzling plots. The two women were one of the first same sex couples to co-write mystery fiction.
Distinctive characters people the vividly detailed Greenough mansion. This reissue is another gem in the American Mystery Classics series.
— Publishers Weekly

A classic closed-circle mystery, perfect for fans of Golden Age house-bound tales and “house movies” such as Sleuth and the recent Knives Out, which has a similar plot. This latest entry in the American Mystery Classics series might inspire an evening spent playing Clue.