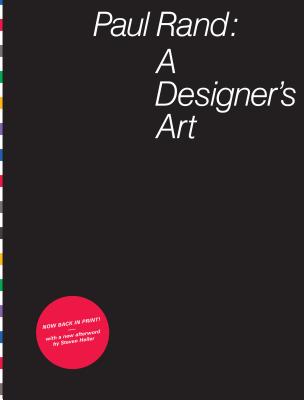 
Currently Unavailable
If Paul Rand was the most influential American graphic designer of the twentieth century, then Paul Rand: A Designer's Art is the most important on his work. A comprehensive collection of his most important and best-known designs, A Designer's Art gives unique insight into Rand's design process and theory. This new edition of Rand's classic monograph, long unavailable, meticulously re-creates the graphic quality of the original. It includes more than two hundred illustrations and twenty-seven essays, and a new afterword by Steven Heller. This book is required reading for anybody interested in modern design.
Paul Rand (1914–1996) was one of the most influential American graphic designers of the twentieth century. In addition to teaching graphic design at Yale for nearly thirty years, he also designed the iconic logos for ABC, IBM, and UPS.

"Rand was one of the guiding lights in the transformation of postwar American graphic design from "soft" to "hard," and because his book presents images and ideas that evolved over all the decades of that development, it almost acts as a time-lapse that lets us watch the changes unfold." -ArtNet

"The new edition features over 200 illustrations, 27 essays and a new afterword by Steven Heller - and makes a cracking resource for anyone interested in modern design." - Creative Bloq

"[A] monograph that serves as a history of Modernism of the mid-to-late 20th century of graphic design and the interaction between art and design as well as the connection of artist and designer." - Omnivoracious

"Paul Rand's collection of essays shows there is much to learn from the genius of this renowned designer. This collection of his work alone is reason enough for many to purchase the book. As you would expect from a designer of Rand's caliber, the book is beautifully designed, and the work is presented in a logical manner. Paul Rand: A Designer's Art is a book that can be read over and over again, each time gaining the reader deeper insight into the mind of one of America's graphic design icons."
- Technical Communication magazine

"Paul Rand's book was published in 1985 and was one of the first of its kind. The renowned graphic designer wanted to create a book that would explain the art of a growing discipline, rather than just show it visually. The book is packed with personal views on design, peppered with his expansive portfolio and also cites a number of renowned academics. Rand was another designer who felt that communication is absolutely key when it comes to design. He states: "Graphic design which evokes the symmetria of Vitruvius, the dynamic symmetry of Hambidge, the asymmetry of Mondrian; which is a good gestalt, generated by intuition or by computer, by invention or by a system of coordinates is not good design if it does not communicate." Beauty and symmetrical supremacy doesn't mean a whole lot if it can't communicate its intended message. For students of design, teachers and professionals, this is a book that is great for explaining and expressing the creative communication of ideals."
-BigThink.com

"Heralded by many as one of the fathers of modern branding, Paul Rand has several inspiring books to his name....A Designer's Art probes deeply into the process of graphic design in general: why it's important; the impact it can have on society; what works, what doesn't, and most importantly, why."
- Creativebloq