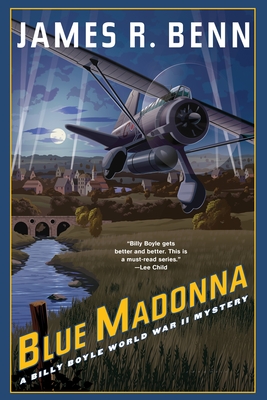 This is book number 11 in the A Billy Boyle WWII Mystery series.

May 1944: Captain Billy Boyle is convicted on spurious charges of black market dealings stripped of his officer’s rank, reduced to private, and sentenced to three months’ hard labor. But Billy is given an opportunity: if he takes on the incredibly dangerous mission of investigating a set of murders at the Allies’ safe house in the French town of Chaumont, he can avoid his punishment. Parachuted in as part of a three-man team the night before the Normandy invasion, he has very little time to find the killer’s identity and lead a group escape back to England, with a whole army of foes nipping at his heels.
James R. Benn is the author of the Billy Boyle World War II mysteries. The debut, Billy Boyle, was named one of five top mysteries of 2006 by Book Sense and was a Dilys Award nominee. A Blind Goddess was longlisted for the IMPAC Dublin Literary Award, and The Rest Is Silence was a Barry Award nominee. Benn, a former librarian, splits his time between the Gulf Coast of Florida and Connecticut with his wife, Deborah Mandel.
Praise for Blue Madonna

"A non-stop action story that adds in the golden nugget of a really cool history lesson."
—Suspense Magazine

"This is a thoroughly entertaining, well-told war adventure, and since the book ends on June 5, 1944, we know there's much more to come."
—Booklist

"The suspenseful story line, set on the eve of the Normandy invasion in 1944, will keep readers turning the pages... Benn movingly depicts Nazi cruelties that Boyle and his comrades witness."
—Publishers Weekly