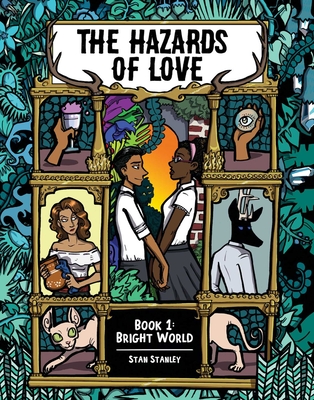 The Hazards of Love follows the story of a queer teen from Queens who makes some mistakes, gets dragged into a fantastical place, and tries to hustle their way back home.

Amparo's deal with the talking cat was simple: a drop of blood and Amparo's name to become a better person. Their mother and abuela would never worry about them again, and they'd finally be worthy of dating straight-A student Iolanthe. But when the cat steals their body, becoming the better person they were promised, Amparo's spirit is imprisoned in a land of terrifying, flesh-hungry creatures known as Bright World.

With cruel and manipulative masters and a society that feeds on memories, Amparo must use their cleverness to escape, without turning into a monster like the rest. On "the other side," Iolanthe begins to suspect the new Amparo has a secret, and after the cat in disguise vanishes, she's left searching for answers with a no-nonsense medium from the lesbian mafia and the only person who might know the truth about Bright World.
Stan Stanley makes comics that are sometimes creepy, sometimes funny, but always queer. She's been making comics since she was in high school and has continued doing so throughout various science-related careers when she was supposed to be doing science. Instead, she created Friendly Hostility, The Hazards of Love, and her online journal comic, Stananigans. The Hazards of Love is heavily influenced by the ephemera of the Mexico in which Stan grew up, though she now finds herself in NYC among a lovely crew of weirdos. She lives with her spouse, a large cat, and a larger collection of bones.
"This fantastical, stunning tale shines in both story and artwork; a must for libraries serving teens."
— School Library Journal [Starred Review]

"This rich, fantastical story is brought to life with Stanley’s vibrant colors and wonderfully bold lines in artwork that is a joy to look at. The cruelty of Bright World will keep readers fully invested in Fawn’s struggle to survive and retain their identity, and the specifics of their nonbinary gender identity, a topic of conversation among several characters, are handled with respect and fidelity."
— Booklist [Starred Review]