Gandhi Today: A Report on India's Gandhi Movement and Its Experiments in Nonviolence and Small Scale Alternatives (25th Anniversary (Paperback) 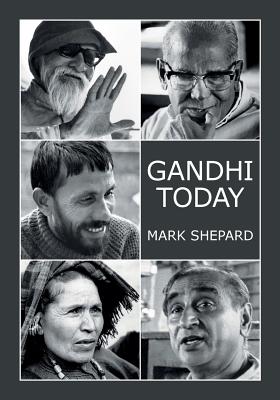 By Mark Shepard
Email or call for price

What became of the Gandhian tradition in India following the death of Mahatma Gandhi? Did it quietly die away? Or were there still Indians who believed in his philosophy and methods, committed to continuing his work?

These were the questions that sent independent journalist Mark Shepard to India in 1978-79. There he found that the tradition begun by Gandhi was very much alive, in such individuals, groups, and movements as:

-- An acclaimed saint who collected over four million acres in gifts of land for the poor.

-- A leader of a nationwide protest movement that helped topple India's ruling party in the mid-1970s.

-- A Peace Army that fought riots with nonviolence.

-- A "Hug the Trees " movement that physically blocked excessive logging in the Himalayas.

-- A People's Court that even tried cases of murder and government corruption.

-- A nationwide movement of villages in which all land was held in common and decisions were made by unanimous consent.

Learn about all these and more in this engaging report on the legacy of the twentieth century's greatest peacemaker and revolutionary.

Mark Shepard is the author of "Mahatma Gandhi and His Myths," "The Community of the Ark," and "Gandhi Today," called by the American Library Association's Booklist "a masterpiece of committed reporting." His writings on social alternatives have appeared in over 30 publications in the United States, Canada, England, Norway, Germany, the Netherlands, Switzerland, Japan, and India.

"Shepard has done a marvelous job describing individuals and groups keeping the spirit of Gandhi alive in India and throughout the world. His book presents living proof the ideals of the Mahatma will never die." -- Cesar Chavez, founder and President, United Farm Workers of America

"This lively book fills a critical gap in our understanding of Gandhi's way. . . . A source of hope and inspiration." -- Joanna Macy, author/activist

"A fascinating study. . . . As useful as it is encouraging." -- Michael Nagler, founder, Peace and Conflict Studies Program, University of California at Berkeley, and author, America Without Violence

"The author is a committed partisan of Gandhian thought and methods, but he is also a reporter who makes a case that Gandhi is an important figure who keeps on marching. . . . Among the successful experiments he visited] are some remarkable ones." -- United Press International (UPI), Jan. 18, 1988