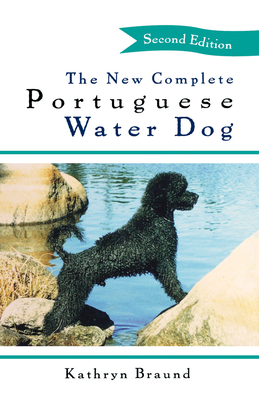 
Ships to Our Store in 1-5 Days
From Uncharted Waters to Safe Harbor
When The Complete Portuguese Water Dog first appeared in 1986, it may have appeared like a voyage into uncharted waters to publish a book on a breed that had so recently faced the specter of complete extinction. In spite of the risks, the book was published, thrived and became the prime reference in the English language for this gallant canine sailor. As the assets of the C o d' qua became known to an ever-widening circle of friends, the book became ever more important as a learning tool. However dogs change, people change and events change ongoing history. Eventually, even the greatest book will benefit from a revision; so it is with this book. Now The New Complete Portuguese Water Dog reprises the great milestones in the breed and documents the momentous progress the Portuguese Water Dog has made over the past decade. This edition tells the story of the once obscure breed that now has found safe haven in homes, show rings and performance arenas wherever fine dogs bring pleasure.

In The New Complete Portuguese Water Dog, author Kathryn Braund salutes the dogs in the limelight and also discusses the essentials of puppy and adult care, health issues, breeding, grooming, training for Obedience, Agility and Water Trials and gives fascinating insights into the "Portie" in other countries. In every way this exciting, new edition is a "must have" for every owner and admirer of this distinctive breed.
A Howell Dog Book of Distinction

Kathryn Braund is a native of Redwood City, California and was brought up in San Francisco. Following an early career in the theater?stage, radio and vaudeville?she married. After raising her two sons, Patrick and Gary, she worked in advertising and public relations. She eventually became a writer and editor of technical publications for aerospace companies. When her sons were almost grown, she began writing professionally about the animals she has always loved?dogs. Her previous books are The Uncommon Dog Breeds (Arco, 1975), Dog Obedience Training Manual, Volume I and Dog Obedience Training Manual, Volume II (Denlinger's Publishers, 1982 and 1983), and she co-authored, with Deyanne Farrell Miller, The Complete Portuguese Water Dog (Howell Book House, 1985). Along with her writing for several dog magazines?Front And Finish, AKC Gazette, and Canine Chronicle?in 1988 Kathryn took on editorship of The Courier, the newsletter of the Portuguese Water Dog Club of America, Inc. She developed the newsletter into an award-winning slick magazine. Under Kathryn's editorship, The Courier received, in both 1989 and 1990, a coveted Best Single Breed National Club Magazine nomination by the Dog Writers Association of America (DWAA) and won the Best National Club Publication Maxwell award for 1991, 1992 and 1994?unprecedented wins. Kathryn retired as editor of The Courier in the spring of 1993. In May 1994 she was brought back to resume this position. She has won over two dozen Best awards along with over a dozen Certificates of Merit from the DWAA, including, in 1985, Best Breed Book and Best Book of the Year for The Complete Portuguese Water Dog, an honor she shared with Mrs. Miller. Her Obedience Training Manual, Volume II, was nominated Best Training Book of 1983. She retired in 1983 as Obedience Editor of the Spotter, the Dalmatian Club of America's quarterly magazine, after ten years in that post. Another honor of which she is very proud is the Public Service Award (1983) from the DWAA for her article in the American Kennel Gazette, Fire in a Motor Home. Kathryn has been a member of the Dog Writers Association of America since 1971. She served as its Secretary-Treasurer for three years, 1980 through 1983, and has been its Newsletter Editor since 1980. In 1985, the DWAA honored her with its Outstanding Service Award for her newsletter contributions. A breeder of both Dalmatians and Portuguese Water Dogs under the Roughrider kennel name, Kathryn's Dalmatian, Ch. Roughrider's Rogue, CDX, was No. 7 in the top-rated Canine Chronicle national system and No. 10 in the Dalmatian Club of America show dog ratings in 1985. Her beautiful Dalmatian bitch, Ch. Roughrider Koda's Kid, UD, placed in the Non-Sporting Group many times. Kathryn has personally placed over two dozen obedience titles on her own dogs, including Utility Dog (UD) titles. She has been a member of the Dalmatian Club of America since 1972 and of the Portuguese Water Dog Club of America since 1983. Kathryn taught obedience classes from 1970 through 1994 throughout the United States. Her Teen Age Dog Obedience classes brought her national acclaim from dog trainers such as Edi Munneke. She also conducted classes for military families at several Air Force bases for over twelve years. These include Grand Forks AFB, North Dakota; Whiteman AFB, Missouri; and Malmstrom AFB, Montana. Kathryn has been a Portuguese Water Dog breeder since 1984. Her Ch. Farmion Geo, UD(Diver), sent to her by Mrs. Miller, was the first male and the third of the breed to earn a Utility Dog title. He was also top-producing sire of champions until mid-1994. Ch. Camerell's Roughrider Seeley, CDX (Seeley) tops all the records as top-producing dam of champion get with twenty-three. A Best-in-Show-winning homebred is Ch. Rough Seas First Buoy AWD (Stormy Gremlin). Stormy was Best of Breed at the Westminster KC show twice, and in 1994 was second in the Working Group at this prestigious show. Roughrider has at least forty-five obedience-titled PWDs, including five Utility Dogs and several with AKC Tracking degrees PWDCA water titles. Kathryn and her husband Cyril were married during World War II and make their home near the village of Winlock, Washington. Kathryn still teaches obedience classes occasionally, and when not teaching, writing, showing her dogs, or helping whelp a litter of Portuguese Water Dog puppies, she pursues hobbies such as fishing and gardening.