Democracy Unchained: How to Rebuild Government for the People (Paperback) 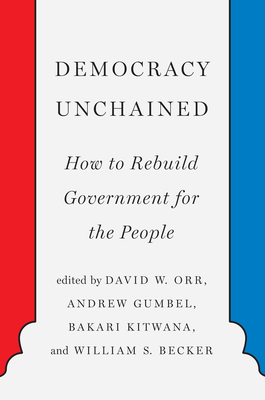 The presidential election of 2016 highlighted some long-standing flaws in American democracy and added a few new ones. Across the political spectrum, most Americans do not believe that democracy is delivering on its promises of fairness, justice, shared prosperity, or security in a changing world. The nation cannot even begin to address climate change and economic justice if it remains paralyzed by political gridlock.

Democracy Unchained is about making American democracy work to solve problems that have long impaired our system of governance. The book is the collective work of thirty of the most perceptive writers, practitioners, scientists, educators, and journalists writing today, who are committed to moving the political conversation from the present anger and angst to the positive and constructive change necessary to achieve the full promise of a durable democracy that works for everyone and protects our common future. Including essays by Yasha Mounk on populism, Chisun Lee on money and politics, Ras Baraka on building democracy from the ground up, and Bill McKibben on climate, Democracy Unchained is the articulation of faith in democracy and will be required reading for all who are working to make democracy a reality.

Part I. The Crisis of Democracy

When Democracy Becomes Something Else: The Problem of Elections and What to Do About It
Andrew Gumbel

The Best Answer to Money in Politics After Citizens United: Public Campaign Financing in the Empire State and Beyond
Chisun Lee

The Problem of Presidentialism
Stephen Skowronek

Race and Democracy: The Kennedys, Obama, Trump, and Us
Michael Eric Dyson

Liberty and Justice for All: Latina Activist Efforts to Strengthen Democracy in 2018
Maria Hinojosa

What Black Women Teach Us About Democracy
Andra Gillespie and Nadia E. Brown

Civic and Environmental Education: Protecting the Planet and Our Democracy
Judy Braus

The New New Deal: How to Reregulate Capitalism
Robert Kuttner

First Understand Why They're Winning: How to Save Democracy from the Anti-Immigrant
Far Right
Sasha Polakow-Suransky

No Time Left: How the System Is Failing to Address Our Ultimate Crisis
Bill McKibben

The Long Crisis: American Foreign Policy Before and After Trump
Jessica Tuchman Mathews

Part IV. Who Acts, and How?

Can Independent Voters Save American Democracy? Why 42 Percent of American Voters Are Independent and How They Can Transform Our Political System
Jaqueline Salit and Thom Reilly

Philanthropy and Democracy
Stephen B. Heintz

David Orr is the Paul Sears Distinguished Professor of Environmental Studies and Politics, Emeritus, at Oberlin College. Andrew Gumbel is a British-born journalist, based in Los Angeles, who has won awards for his work as an investigative reporter, a political columnist, and a feature writer. He is a regular contributor to The Guardian and the author of Down for the Count and Won't Lose This Dream (both from The New Press). He is also the author of Oklahoma City: What the Investigation Missed, and Why It Still Matters. Bakari Kitwana is a journalist and activist in the area of hip-hop and black youth political engagement. William Becker is executive director of the Presidential Climate Action Project.